For photos, see links at the bottom 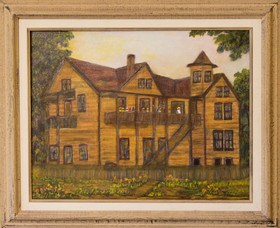 ST. AUGUSTINE, FL (12/18/2013)(readMedia)-- Flagler College and the Crisp-Ellert Art Museum are pleased to announce a new exhibition, "The Object Tells a Story: African American Folk Art from Florida," opening on January 20, 2014. The exhibit will run through Feb. 28.

"The Object Tells a Story" brings together a selection of works by four well-known African American vernacular artists from Florida: Alynne Harris, Mary Proctor, Ruby C. Williams and Purvis Young. Interspersed throughout the exhibition will be objects lent by members of St. Augustine's African American community, including paintings, quilts, dolls and ceramics, along with artworks created by students from Ketterlinus and Osceola Elementary Schools during recent workshops with Ruby C. Williams at Fort Mose Historic State Park. Recorded interviews as well as written statements by each community lender will be displayed alongside their chosen objects.

While neither Harris, Proctor, Williams or Young undertook professional arts training, each has found their way into the annals of American art. Making use of available resources, house paint or acrylic on plywood, canvas or discarded doors, scraps of wood, fabric and other detritus found around the house and yard, the works they create demonstrate an inherent narrative quality, as do many objects that are considered to be "folk" or "vernacular" art. As such these works touch on subjects from religion and history, race and urban development, to joy and death.

The works included in the exhibition contain stories that reflect both personal truths and collective histories and highlight a sense of community. Objects by better-known artists will provide an historical and cultural context for folk art, through which visitors can experience and explore how the rich cultural heritage of St. Augustine's African American community plays a vital role in the larger framework of the history of African Americans in the South.

By illuminating and celebrating the ties between what is widely held as "folk art" and the objects and artworks lent by St. Augustinians, we hope to create a lasting conversation about the significance of objects – individually and collectively, intimately or within a museum setting. Further, we hope that these broader questions and the objects themselves resonate with museum visitors and other groups of disparate backgrounds. Through the participatory aspect of this exhibition, we aim to redefine the space of the museum by making it a site more actively engaged with generating a dialogue about community, history, and art.

"The Object Tells a Story" will open in concert with the City of St. Augustine's exhibition, "Journey: 450 Years of the African-American Experience," on view at the Visitor's Center, along with several other venues throughout the city.

This exhibition has been generously supported by a grant from The Community Foundation of Northeast Florida. Further in-kind support has been provided by the City of St. Augustine and Fort Mose Historic State Park.

For further information on the exhibition and related programs, please visit the website at www.flagler.edu/crispellert, or contact Julie Dickover at 904-826-8530 or crispellert@flagler.edu.

Flagler College is an independent, four-year, comprehensive baccalaureate college located in St. Augustine, Fla. The college offers 29 majors, 34 minors and two pre-professional programs, the largest majors being business, education and communication. Small by intent, Flagler College has an enrollment of about 2,500 students, as well as a satellite campus at Tallahassee Community College in Tallahassee, Fla. U.S. News & World Report and The Princeton Review regularly feature Flagler as a college that offers quality education at a relatively low cost. A Flagler education is less than half the cost of similar private colleges, and competitive with many state universities. A relatively young institution (founded in 1968), Flagler College is also noted for its historic beauty. The centerpiece of the campus is the former Hotel Ponce de Leon, a grand resort built in 1888 by Henry M. Flagler, industrialist, railroad pioneer and co-founder of Standard Oil. The Ponce has been designated as a National Historic Landmark. For more on Flagler College, visit www.flagler.edu.