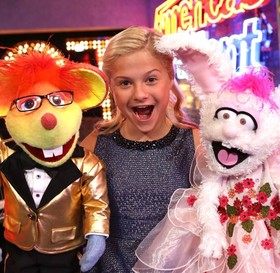 Darci Lynne and friends will perform at the State Fair of WV on Aug. 11.

LEWISBURG, WV (06/17/2019) (readMedia)-- State Fair Officials are happy to announce Darci Lynne has been added to the 2019 State Fair of West Virginia Concert Series. Darci Lynne and her friends will take the stage on Sunday, August 11, at 7 pm!

Ticket prices and details on how to order can be found at www.statefairofwv.com . Tickets will be available at the State Fair Box Office, via Etix at http://statefairofwv.com/entertainment/ or by calling 1-800-514-ETIX (3849) Monday through Friday 9 am – 6 pm or Saturday 9 am – 5 pm.

Winning NBCs "Americas Got Talent" at just 12-years old by the most votes for a final performance in the history of the show, singer/ventriloquist Darci Lynne impresses audiences across the country with her sweetheart disposition and undeniable, show-stopping talent beyond her years.

Accompanied by her musical friends including a divaesque rabbit: Petunia, a shy and soulful mouse: Oscar and a sarcastic old woman: Edna. Singing through her friends helped the young entertainer find a voice inside she didn't know she had and helped her overcome a lifelong struggle with shyness.

Darci kicked off 2019 with some of the most memorable AGT contestants from 184 countries becoming the runner up out of the 50 top competitors on the first ever "Americas Got Talent: Champions, and has recently partnered with Mattel as a Role Model for Barbies "Be Anything Tour" in celebration of Barbie's 60th Anniversary. Darci's appearances were some of the most attended tour stops attracting a packed multi-generation audience.

Darci and her friends are continually on the road bringing smiles to audiences across the country- catch her in a city near you!