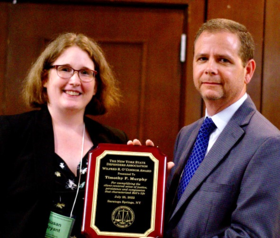 "Bringing information to lawyers in a way that they can use to best help the people they represent is a vital part of NYSDA's mission to improve the quality and scope of public defense," said Executive Director Susan C. Bryant, "and Tim does that consistently, humbly, and very well." From the first time that she saw him make a presentation, Bryant said, "I have been impressed by his thoughtfulness and brilliant legal analysis and his dedication to sharing all of that with NYSDA and defenders around the state."

Murphy's presentations consistently receive plaudits from those in attendance. "Tim Murphy is fabulous! Sees the big picture! Very entertaining," wrote one lawyer about a continuing legal education session in New York City. Importantly, another lawyer at the same session noted that Murphy "made appellate discussions very accessible and easy to apply."

David Schopp, head of the Legal Aid Bureau (LAB) of Buffalo where Murphy was a staff attorney in the appellate unit for 9 years, wrote Bryant that "Tim quickly stood out as one of the Unit's most thorough researchers and one of its best writers. Tim has an amazing passion for appellate work, a real empathy for his clients and a consequent commitment to do the very best on their behalf." Murphy later served as the Chief Attorney of the Unit. "One of the first things he did was to change the unit's name to the Appeals and Post-Conviction Unit to better reflect his intent to expand to the unit's range of post-conviction representation," Schopp recalled. He added, "[t]he increased quality of representation established during Tim's leadership of the Unit continues to this day."

Mike Deal, a colleague from Murphy's five years in private practice, who now is the Managing Attorney of the Criminal Defense practice at LAB Buffalo, wrote "Tim fights until there's nowhere else to turn. His devotion to his clients and his determination to their cause is an example for us all."

Murphy carries that passion into the training he did. One lawyer said this in an evaluation form: "T. Murphy – Thank you, thank you, thank you for the client centered presentation and encouragement!" Such enthusiasm is not necessarily expected from a training entitled "Starting and Perfecting an Assigned Appeal."

Murphy is currently a member of the Appellate Unit of the Federal Public Defender's Office for the Western District of New York in Buffalo. When he moved to the federal defender position a few years ago, he assured NYSDA that he would continue to provide training-and followed through.

His generosity with his time and talent is not limited to one organization. He is a director and vice-president of the New York State Association of Criminal Defense Lawyers (NYSACDL) and is a leader of its amicus committee. As current NYSACDL president Brian Melber noted, "Tim's leadership has been instrumental in the Association's advocacy on behalf of criminal defendants in issues of statewide importance."

In 2016 Murphy appeared with other lawyers from across New York State on a panel for the National Legal Aid and Defender Association to discuss "Public Defense Performance Standards: A Tool For Determining and Defending Proper Workloads"; the topic matters because when defenders have too many cases, they cannot represent any client well.

All these are only some of Murphy's efforts to ensure there is justice for people who receive public defense services, efforts that make him worthy of the Wilfred R. O'Connor Award he received Monday night.

Wilfred R. O'Connor was a founding member of the Defenders Association and its president from 1978 to 1989. His beliefs were clear: every defendant, regardless of race, color, creed, or economic status, deserves a day in court and zealous client-centered representation. He believed in making a difference one life at a time – through mercy, justice, and compassion.