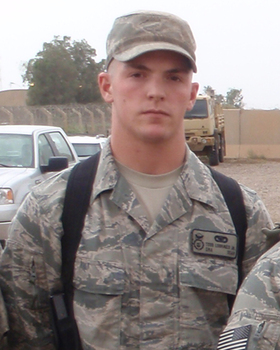 He was a member of the 105th Security Forces Squadron which had deployed a team to Afghanistan at the end of June. The unit is trained to secure air bases and trains and fights much like Army infantry.

Lobraico, age 22, was on his second deployment since enlisting in the 105th Airlift Wing as a security forces apprentice in June 2008. He deployed to Balad Air Base, Iraq from December 2010 to June 2011.

"The New York National Guard family extends our deepest sympathy to the family and friends of Staff Sgt. Todd Lobraico Jr. This fine, young airman had already served in a combat zone once before and knew the risks he was facing. Despite that, he did his job professionally and with courage. He will be missed by all who served with him and knew him," said Major General Patrick Murphy, the Adjutant General of New York.

"One of the things that Staff Sgt Todd Lobraico most certainly knew when he volunteered to deploy is that our business is a dangerous business," said Col. Timothy LaBarge, the commander of the 105th Airlift Wing.

" Todd Jr. faced that fact and still did his job every day with unblinking determination and professionalism. He is rock solid model of the American Combat Airman and we are extraordinarily proud of him. The pride that we feel about Staff Sgt. Lobraico and his squadron mates amplifies that sorrow that we individually and collectively feel upon his passing. Todd Jr. has, and will continue to be, a shining example of heroism for all of us to look up to," LaBarge said.

Lobraico joined the 105th Airlift Wing in 2008 after graduating from New Fairfield High School in Fairfield, Connecticut. He attended the Air Force's Basic Military Training at Lackland Air Force Base, Texas, graduating in November 2008 and then entered Security Forces Apprentice School which he finished in February 2009.

Lobraico was a resident of New Fairfield, Connecticut.

Lobraico is the first member of the New York Air National Guard to die in a combat zone since Sept. 11, 2001.

Thirty-two members of the New York Army National Guard have been killed in action or died in a combat zone since Sept. 11, 2001. Nine of those deaths were in Afghanistan and 23 were in Iraq.