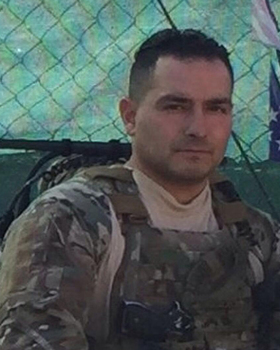 Tech Sgt. Joseph G. Lemm and Staff Sgt. Louis Michael Bonacasa (Bone-a-casa) died when a suicide bomber attacked their patrol in a village outside Bagram Air Base in Parwan Province. Four other Air Force members died in the attack.

The two belonged to the 105th Base Defense Squadron which had deployed members to Bagram in October. Members of the squadron provide security for air bases by conducting missions "outside the wire" and employ equipment and tactics similar to Army infantrymen.

Lemm, age 45, was a resident of West Harrison, N.Y. and enlisted in the 105th Airlift Wing in 2008, serving his entire time with the 105th Base Defense Squadron as a security force member. He had previously served in the military from 1988 to 1996.

His prior deployment experience included missions to Afghanistan from January to June 2013 and to Iraq from June to December 2011.

Bonacasa, age 31, was a resident of Coram, N.Y. He enlisted in the active Air Force in 2002 and transitioned to the New York Air National Guard's 106th Security Forces Squadron, at F.S. Gabreski Air National Guard Base in Westhampton Beach, N.Y. in 2008. He joined the 105th Base Defense Squadron in 2010.

He deployed to Afghanistan from January to June 2013, and to Iraq from June to December 2011.

"The New York National Guard family extends our deepest sympathy to the family and friends of Tech. Sgt. Joseph Lemm and Staff Sgt. Louis Bonacasa, as well as the Airmen who served with them," said Major General Patrick Murphy, the Adjutant General of New York. "Both Airmen served with distinction."

"We will honor and remember their service, professionalism, and dedication to our state and nation," Murphy said.

"Tech. Sgt. Joseph Lemm and Staff Sgt. Louis Bonacasa are true American heroes; citizen Airmen who repeatedly and without hesitation answered their nation's call in the finest traditions of the United States Air Force, the Air National Guard, the 105th Airlift Wing and the 105th Base Defense Squadron," said Col. Timothy LaBarge, the commander of the 105th Airlift Wing.

"Leading a team of passionate defenders, they took on the most challenging mission for themselves and epitomized the concept of leading from the front, a concept that has distinct risks that they both acknowledged and embraced. Their example and sacrifice will never be forgotten as we do our part, on behalf of a grateful nation, to thank and memorialize them in perpetuity," Labarge said.

The first New York Air National Guard Airman to die in combat was Staff Sgt. Todd J. Lobraico Jr., who was killed while operating in the vicinity of Bagram Air Base on Sept. 3, 2013. Like Lemm and Bonecasa, he was a member of the 105th Base Defense Squadron.

Since Sept. 11, 2001 12 members of the New York Army and Air National Guard have died while deployed in Afghanistan.