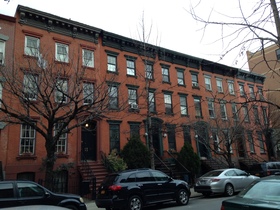 The Pleasant Avenue neighborhood in East Harlem, which played a major role in the history of upper Manhattan from the late 1800s through the 1970s, will be the subject of a cultural resources survey.

ALBANY, NY (11/09/2016)(readMedia)-- The New York State Council on the Arts together with the Preservation League of New York State will award a $10,000 grant to CIVITAS Citizens, Inc. and their partner Landmark East Harlem to support a Cultural Resources Survey of the East Harlem / Pleasant Avenue Neighborhood. The Preserve New York grant will be presented on Thursday, November 10 at 1:00 p.m. at East 118th Street at Pleasant Avenue, East Harlem.

The Pleasant Avenue neighborhood in East Harlem played a significant role in the history of upper Manhattan from the late 1800s through the 1970s. By the 1930s, East Harlem housed the largest concentration of Italian immigrants in the country and was the first "Little Italy" in the nation. While the Italian roots of this neighborhood are still visible in its row houses, tenements, stores and churches, the area has recently become a magnet for Mexican immigrant families and businesses. Construction of the nearby Second Avenue Subway and pending rezoning pose a threat to the neighborhood's historic character.

"CIVITAS and Landmark East Harlem are thrilled to receive this Preserve New York grant from the Preservation League of New York State and the New York State Council on the Arts," said Jameson Mitchell, Executive Director of CIVITAS. "This funding will go a long way in helping to ensure that historic East Harlem is preserved for future generations. We look forward to sharing the results of the cultural resource survey in the coming months."

"At its August, 2016 meeting, the Preserve New York panel selected 26 applicants in 18 counties around the state to share $202,000 in funding," said Erin Tobin, the League's Director of Preservation. "As always, the competition for these funds was intense. We are delighted to help advance the preservation efforts in East Harlem with timely funding from Preserve New York."

For more information on the Preserve New York grant program, please call 518-462-5658 x 10 or visit the League's website at www.preservenys.org.