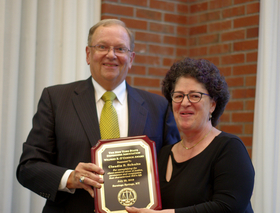 Schultz, currently the Managing Attorney, Criminal Defense, at the Legal Aid Bureau of Buffalo, Inc., is known for her dedication to quality representation of people who cannot afford an attorney and are assigned publicly-paid lawyers. "Claudia is the consummate client-centered defender: she is creative, compassionate and always looking for ways to inspire practitioners to provide broad-based, high-quality representation," said Stephanie Batcheller, Senior Staff Attorney at NYSDA.

Giving a geographical as well as professional meaning to the phrase "broad experience," Schultz spent 25 years as a defense lawyer in Nassau County, then became the Deputy Administrator of the Erie County Assigned Counsel Program. On Long Island, she was a defense lawyer accepting work as assigned counsel, made training presentations for several bar associations, and was Deputy Bureau Chief of the District Court Bureau with the Legal Aid Society of Nassau County. She has been deeply involved in training at her current and prior positions in Erie County, and has served on the faculty for NYSDA's well-known Basic Trial Skills Program.

The award Schultz received is named for Wilfred R. O'Connor, a founding member of the Defenders Association and its president from 1978 to 1989. The award was established by NYSDA's Board of Directors to remember Bill and honor his sustained commitment to the client-centered representation of the poor.