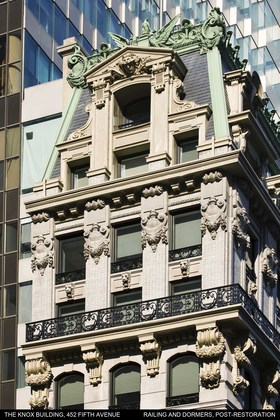 "This is yet another exemplary project from Wiss Janney Elstner Associates, demonstrating the methodical approach the firm takes to preservation and restoration," said Jay DiLorenzo, President of the Preservation League. "Careful consideration of technical, theoretical, aesthetic and practical issues makes this a model project that sets a high standard for other practitioners."

The New York Public Library's Stephen A. Schwarzman Building, originally known as the Central Library, is considered a significant example of the Beaux-Arts style and is the most important work of the firm of Carrère and Hastings.

According to Timothy Allanbrook AIA of Wiss Janney Elstner Associates, "Patience and Fortitude, the iconic marble lions facing Fifth Avenue, have always welcomed researchers, visitors and tourists alike to the front plaza of the New York Public Library. Unfortunately, until recently, what awaited them was a soiled, pigeon-infested structure with missing and crumbling stonework shrouded in safety netting. Now, in time for the Centennial of the original opening, the facades have been restored to their original brilliance. We are very pleased to receive this award from the Preservation League."

"As one of the Awards Jurors noted, 'this project is impressive because it is subtle,'" said Jay DiLorenzo. "Others remarked that this was a great project of highest quality, with new systems to make the historic spaces in this significant museum and library complex more accessible. We are pleased to have the opportunity to honor the magnificent work undertaken at this National Historic Landmark, New York City Landmark and Interior Landmark."

The interior restoration of Pierpont Morgan's library is the most extensive since the building's completion in 1906. The Italianate library, designed in the spirit of the High Renaissance by McKim Mead and White, was created as the private domain of financier Pierpont Morgan. It ranks as one of New York's great architectural and historical treasures, and its rooms are regarded as some of the most beautiful in America. The Library stands as Charles McKim's masterpiece and is familiarly known as the McKim Building.

According to William M. Griswold, Director, The Morgan Library & Museum, "This historic preservation project pays tribute to the lasting legacy of Pierpont Morgan and Charles McKim. Sensitively incorporating new exhibition elements within the Library's historic context, this restoration facilitated the display of more than 300 items from the Morgan's permanent collection of rare books and art-a tenfold increase over what was previously displayed. The McKim building is, in many ways, the heart and soul of the Morgan. Now the balance between new and old is where it should be."

"The re-introduction of details to the front façade and of curved glass sidelights to the 5th Avenue entry has returned this building to its Beaux-Arts glory," said Jay DiLorenzo. "With strict attention to history, materials and practice, Platt Byard Dovell White Architects has positioned the structure for use long into the 21st century."

The Knox Hat Company was on the forefront of the trend to popularize Fifth Avenue as a retail corridor when it moved its headquarters to 452 Fifth Avenue. The 10 story building, completed in 1902, is one of New York's finest examples of Beaux-Arts style commercial architecture. After undergoing alterations in the 1920s and 1960s, the recent restoration brings the building closer to its original appearance than it had been for 90 years.

According to Anne Holford-Smith, Senior Associate with Platt Byard Dovell White Architects, "We relied heavily on historic photographs to reproduce the building's missing features. In the restoration of this Beax-Arts landmark, undertaken for owner HSBC, we utilized construction methods and materials on a scale not often found in contemporary restoration projects, and turned back the clock on the Knox Building. We are deeply gratified to receive this award."

The awards will be presented at the Preservation League's Annual Meeting and Awards Ceremony in New York City at 6:00 p.m. on Thursday, May 12th at the historic New York Yacht Club, 37 West 44th Street.

The complete list of award winners is: The Cathedral of the Immaculate Conception Interior, Albany County; The Franklin Building, Jefferson County; The Knox Building, the New York Public Library Exterior, and Pierpont Morgan's 1906 Library Interior, all in New York County; 1844 Nine Mile Creek Aqueduct, Onondaga County; and Montour House, Schuyler County. Uncovering the Underground Railroad, Abolitionism and African American Life in Wayne County, New York: 1820-1880 by Judith Wellman and Marjory Allen Perez will be honored as an outstanding publication. CenterState Corporation for Economic Opportunity in Syracuse will be honored for organizational excellence. Howard Kirschenbaum will be honored for individual excellence for his contribution to historic preservation in the Adirondack Park.

"In New York State, the preservation and reuse of our historic buildings is fundamental to the economic revitalization of our cities, towns, and villages. The League's annual Awards program allows us to share preservation success stories that may one day serve as inspiration to others," said DiLorenzo. "Each year, we are impressed by the number and variety of laudable nominations, and this year was no exception. We are delighted to celebrate the exterior restoration of The New York Public Library, the restoration of Pierpont Morgan's 1906 Library, and the restoration of The Knox Building in Manhattan, and to give these efforts the statewide recognition they deserve."

The Preservation League's Excellence in Historic Preservation awards program is funded by a generous grant from the Arthur F. and Alice E. Adams Foundation of Miami, Florida.

By leading a statewide preservation movement, sharing information and expertise and raising a unified voice, the Preservation League of New York State promotes historic preservation as a tool to revitalize our neighborhoods and communities, honor our heritage and enrich our lives.