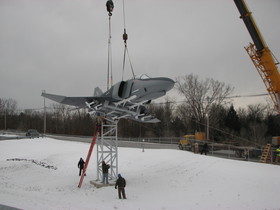 Workers craned a restored F-4 Phantom II jet onto its pedestal Friday afternoon at the Eastern Air Defense Sector in Rome. The F-4 Phantom II was one of the Air Force's most famous planes.

Perched on a pedestal 15 feet above a small pond at the facility's southwest edge, the imposing 47-year-old F-4 Phantom jet demands attention.

"The elevated pedestal is a fitting place of honor for an aircraft that served its country for more than four decades," said Col. John Bartholf, EADS Commander. "The display adds to our facility's visual appeal, while reminding the public and our staff of the Air Force's proud history."

Provided to EADS by the Air Force Research Laboratory's Rome Research Site, the plane was restored, re-skinned and re-built in various places by Mohawk Valley Community College's( MVCC) Aviation Training Center, which is located at Griffiss International Airport. After receiving a final coat of paint and three sets of de-militarized air-to-air missiles, the plane was moved to EADS. Transported a little more than one mile across the Griffiss Business and Technology Park by truck, the seven-ton aircraft required a crane to lift it onto the pedestal.

Walter Constantini, the director of MVCC's Airframe and Powerplant Technology program, oversaw the plane's restoration. Constantini said 55 students from three different classes worked on the aircraft and estimated that 4,500 man-hours of work were needed for the restoration.

The classes started work on the plane in October 2009, when it was transported from the Newport, N.Y radar test site to the MVCC's facility. The F-4 had been used for antennae and electronic countermeasures research at Newport since 1972.