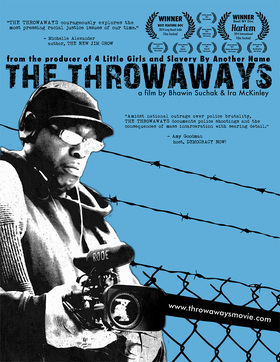 CORTLAND, NY (09/30/2015)(readMedia)-- Award-winning filmmaker Ira McKinley will share his 2014 personal exploration of the devastating impact of police brutality and mass incarceration on the black community on Tuesday, Oct. 6, at SUNY Cortland.

McKinley, who co-directed with Bhawin Suchak, will answer questions after the screening of his 62-minute film, "The Throwaways" at 7:30 p.m. in Sperry Center, Room 106.

The event, which is free and open to the public, continues the College's yearlong series on "Thinking about War and Peace."

The documentary follows a theme expressed by Ralph Ellison: "I am an invisible man. I am a man of substance, of flesh and bone, fiber and liquids; and I might even be said to possess a mind. I am invisible, understand, simply because people refuse to see me."

As told through the eyes of McKinley, a formerly incarcerated activist, the documentary shows - with rawness, urgency and power - the rising national movement to fight against a wave of police killings of black people in America.

The film has been described as timely and provocative.

"'The Throwaways' is more just than an illumination of marginalized people at their weakest moments," McKinley said. "It is a call to action, a story of directly engaging in the fight for justice."

"'The Throwaways' courageously explores the most pressing racial justice issue of our time: the mass incarceration and racial profiling of poor people of color," writes Michelle Alexander, author of The New Jim Crow.

The screening and guest speaker are sponsored by the College's Center for Gender and Intercultural Studies (CGIS), the Center for Ethics, Peace and Social Justice, the Africana Studies and Philosophy departments, and an Auxiliary Services Corporation grant.