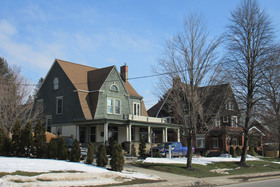 ALBANY, NY (09/19/2016)(readMedia)-- The New York State Council on the Arts together with the Preservation League of New York State will award a total of $38,000 to five Erie County organizations and municipalities. The Preserve New York grants will be presented on Tuesday, September 20 at 9:00 a.m. at the Moot Senior Citizens Center, 292 High Street, Buffalo. Grants will be made to Buffalo Niagara Medical Campus, Buffalo ($7,000); Preservation Buffalo Niagara, Buffalo ($7,000); Roycroft Campus Corporation, East Aurora ($12,000); the Village of Hamburg ($5,000); and the Village of Springville ($7,000).

The Fruit Belt, once called "The Orchard" because of its many fruit trees, has a rich history of German and African American settlement. It contains a mix of distinctive residential structures dating from the 1830s through the 1880s, but many have been lost to demolition, urban renewal and development pressure from the nearby medical facility. Many Fruit Belt homeowners, with neighborhood ties going back generations, are concerned over the loss of historic character and wish to prevent future deterioration. A Preserve New York Grant will help the Buffalo Niagara Medical Campus, a not-for-profit community partner, retain Preservation Studios of Buffalo to complete a cultural resource survey of the neighborhood. The Buffalo Niagara Medical Campus is committed to working with groups such as the Fruit Belt/McCarley Gardens Housing Task Force to revitalize the area.

In its prime, "Broadway-Fillmore" was considered the heart of Buffalo's Polish East Side. The neighborhood underwent several waves of immigration after 1870, resulting in a number of architecturally significant religious, residential, commercial and cultural properties dating from the late 19th through the early 20th centuries. Broadway-Fillmore also boasts some fifteen buildings designed by Wladyslaw H. Zawadzki (1872-1926), Buffalo's most important Polish architect. Threats to the neighborhood include vacancy, deterioration, vandalism, and continued demolition of architecturally and historically significant homes and businesses. A Preserve New York grant will help Preservation Buffalo Niagara, the region's full service preservation not-for-profit, to hire Preservation Studios of Buffalo to complete a cultural resource survey of the area. The community's goal for the survey is to protect and steward the neighborhood's remaining cultural heritage.

The Roycroft Campus is the best preserved and most complete complex of buildings of the American "guilds" that evolved at the turn of the 20th century. Elbert Hubbard, an author, lecturer, and entrepreneur began developing the campus in 1897, inspired by the leaders of the English Arts and Crafts movement. The Roycroft Campus became a National Historic Landmark in 1986 and comprises 14 structures including the Inn, Chapel, Print Shop, Furniture Shop, and Copper Shop. A 2005 Preserve New York grant supported the cost of a historic structure report for the Copper Shop. Having recently taken ownership of the Print Shop, the Roycroft Campus Corporation plans to document the building for rehabilitation. A Preserve New York grant will help the corporation retain Flynn-Battaglia Associates of Buffalo to develop a historic structure report for the Print Shop. This document will provide guidance for care and maintenance of the building.

The Village of Hamburg developed as a suburban community along the Buffalo railroad corridor, thirteen miles south of downtown. The west side of Hamburg retains a number of notable industrial buildings and adjacent residential neighborhoods dating from the 1860s through 1900s. The Village's Historic Preservation Commission hopes to highlight, protect and preserve the historic fabric of Hamburg as they support a village-wide strategic master plan. Redevelopment of the industrial buildings along the railroad corridor is a major component of the plan, as historically sensitive redevelopment has attracted young professionals to live and work in similar areas. A Preserve New York grant will help the village retain Bero Architecture PLLC of Rochester to complete an intensive level survey of the neighborhood. The survey will document the significance of the area's structures, determine which are eligible for the National Register of Historic Places, and could help property owners take advantage of historic rehabilitation tax credits.

The Village of Springville, a Certified Local Government, has a strong commitment to historic preservation planning. Springville's Main Street reflects the community's late 19th and early 20th century prosperity and includes examples of Queen Anne, Italianate, Shingle, Colonial Revival, Greek Revival and Second Empire styles. The East Main-Mechanic Streets Historic District was added to the National Register in 2002, and a Preserve New York grant supported a National Register Nomination for the East Hill Historic District in 2014. A Preserve New York grant will help the Village hire Clinton Brown Company Architecture of Buffalo to complete the fieldwork and documentation to expand the boundary of the East Main-Mechanic Streets Historic District and prepare a nomination for the West Main Street Historic District. The Village hopes to address the threats of highway rerouting and sprawl by adding more buildings to the National Register, and making it possible for property owners to receive tax credits for repairs and restoration work.

"At PBN, we believe that the historic context in which we live our daily lives enriches our physical, intellectual, and emotional well-being; that historic preservation is a means of creating more vibrant, affordable, and sustainable communities; and that all communities and neighborhoods deserve to have their historic resources protected," said Jessie Fisher, Executive Director of Preservation Buffalo Niagara (PBN). "We are so pleased to see all five of these worthy projects funded this year, and are especially thrilled for the Broadway-Fillmore and Fruit Belt neighborhoods of Buffalo, which will finally get the notice their historic resources have long deserved."

"The citizen call to preserve the Fruit Belt neighborhood, with its street level urban fabric, historic buildings, walkability, and architectural diversity, can continue to move forward with this grant that aligns resident interest with revitalization and preservation," said Veronica Hemphill-Nichols, founder of the Fruit Belt / McCarley Gardens Housing Task Force.

"As we fight for Buffalo to continue to undergo the cultural and economic renaissance it is currently experiencing, so too must we fight to preserve its rich and storied past. The architectural, historical and cultural resources located in the unique Fruit Belt and Broadway-Fillmore neighborhoods have a wonderful story to tell," said New York State Senator Tim Kennedy (D-Buffalo). "By supporting Buffalo Niagara Medical Campus, Preservation Buffalo Niagara and others as they explore ways to preserve these corridors, we're simultaneously investing in the families who have called these communities home for years, and will continue to for generations to come."

"At its August, 2016 meeting, the Preserve New York panel selected 26 applicants in 18 counties around the state to share $202,000 in funding," said Erin Tobin, the League's Director of Preservation. "As always, the competition for these funds was intense. We are delighted to help advance the preservation efforts of these five organizations and municipalities with timely funding from Preserve New York."

For more information on the Preserve New York grant program, please call 518-462-5658 x 10 or visit the League's website at www.preservenys.org.