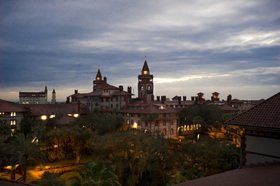 ST. AUGUSTINE, FL (04/20/2012)(readMedia)-- The former Hotel Ponce de Leon - the centerpiece of Flagler College in St. Augustine and a National Historic Landmark - won the write-in vote to be included in the Florida Chapter of the American Institute of Architects' "Florida Architecture: 100 Years. 100 Places" competition.

To celebrate its 100th anniversary, the organization asked Floridians to vote on the top 100 buildings in an online competition. The Fontainebleau Miami Beach took first place in the popular vote. The Ponce wasn't included in the original list of 100 structures, but it garnered enough write-in votes to be recognized.

More than 2 million votes were cast in the competition.

The Ponce joins other Florida architectural structures including the Dalí Museum in St. Petersburg, Cinderella's Castle in Orlando, the Historic Capitol Building in Tallahassee, the Florida Aquarium in Tampa and the Frank Lloyd Wright-designed campus of Florida Southern College.

A former luxury hotel, the Ponce was built by Henry Flagler and it opened in 1888. It is widely considered one of the best examples of Spanish-Moorish Renaissance architecture.

For more information, go to: http://www.aiafla.org/

Flagler College is an independent, four-year, comprehensive baccalaureate college located in St. Augustine, Fla. The college offers 24 majors, 29 minors and two pre-professional programs, the largest majors being business, education and communication. Small by intent, Flagler College has an enrollment of about 2,500 students, as well as a satellite campus at Tallahassee Community College in Tallahassee, Fla. U.S. News & World Report and The Princeton Review regularly feature Flagler as a college that offers quality education at a relatively low cost; tuition is $22,500, including room and board. A relatively young institution (founded in 1968), Flagler College is also noted for the historic beauty of its campus. The main building is Ponce de Leon Hall, built in 1887 as a luxury resort by Henry Flagler, who co-founded the Standard Oil Company with John D. Rockefeller. For more on Flagler College, visit www.flagler.edu.