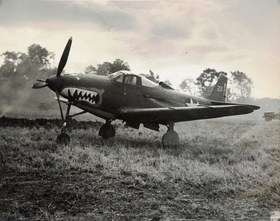 The P-39 Airacobra, but in Niagara Falls served in the South Pacific and was used as a tank buster by the Russians during World War II.

SARATOGA SPRINGS, NEW YORK (01/26/2022) (readMedia)-- New York's role in aircraft production during the Second World War is the subject of a free talk at the New York State Military Museum in Saratoga Springs on Saturday, January 29.

Patrick Chaisson, a military historian and retired Army officer, will talk about the companies which built these aircraft and their role in the war at 2 p.m.

Visitors will have to wear masks to attend the program: "Wings of Victory: Aircraft Manufacturing in New York State during World War II".

The number of visitors sitting in will be limited to 40.

Chaisson will be talking about two iconic World War II war birds and one that never quiet made the list.

The F6F Bearcat was a carrier fighter built specifically to take on the Japanese Zero based on what was learned by recovering a crashed Zero in Alaska. The plane was built on Long Island by Grumman.

The other iconic aircraft is the P-47, a stocky plane officially called the Thunderbolt, but called "the Jug" by its pilots. The plane was designed as a fighter, and did that job, but became especially famous as a fighter-bomber killing German tanks. The plane wads built by Republic Aircraft on Long Island.

The not-so-iconic plane is the P-39 Airacobra. The plane was built by Bell Aircraft in Niagara Falls. It was packed with technology but did not perform well as a fighter.

However, the plane was shipped to Russian through Lend-Lease and the Soviet pilots turned it into a tank killer.

The New York State Military Museum and Veterans Research Center is located at 61 Lake Avenue in Saratoga Springs. The museum is maintained by the New York State Division of Military and Naval Affairs with the mission of telling the story of New Yorkers in our nation's conflicts.

Additional free presentations will be held throughout February, March and April.

The talks are sponsored by the Friends of the New York State Military Museum with support from Stewart's Shops.