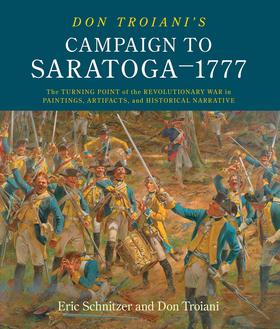 Illustrations from the book "Don Troiani's Campaign to Saratoga-1777" will illustrate a free talk at the NY State Military Museum on March 7.

LATHAM, NY (03/03/2020) (readMedia)-- The British Revolutionary War campaign, which climaxed with the American victory at Saratoga in 1777, is the subject of a free illustrated talk at the New York State Military Museum on Saturday, March 7 at 2 p.m.

Eric Schnitzer, a White Creek resident and an expert on General John Burgoyne's campaign to capture Albany and split New England from New York during the Revolutionary War, will tell the story of the Battle of Saratoga as depicted in a serious of paintings by historical artist Don Troiani.

Troiani is famous as a painter of meticulously accurate military history paintings, which hang in museums and at American military installations around the world.

Schnitzer and Troiani collaborated on the book Don Troiani's Campaign to Saratoga - 1777.

This illustrated history features many new paintings, previously unpublished eyewitness accounts, photographs of important artifacts, and a solid, detailed historical narrative including background on the campaign leading up to Saratoga.

Schnitzer is considered one of the foremost experts on the Northern Campaign of 1777. He earned his degrees in History and Fine Art from the University at Albany (SUNY Albany) in 1998. He is Founder and commander of the recreated 62nd Regiment of Foot, a historical reenactment group, and enjoys researching, interpreting, and writing about all aspects concerning the Northern Campaign of 1777.

He and his wife, Jenna, who shares his love of all this, live in an 18th-century house in the White Creek Historic District, located a stone's throw from Bennington Battlefield and the estate of Simeon Covell, a royalist captain who served in Burgoyne's Army.

Copies of the book will be on sale following the presentation.

The March 7 talk is one of a series of free presentations being offered this month by the New York State Veterans Research Center and Military Museum, which is located at 61 Lake Avenue in Saratoga Springs.