Olean resident Charlie Brown, who fought with the 1st Battalion 258th Field Artillery, will be honored 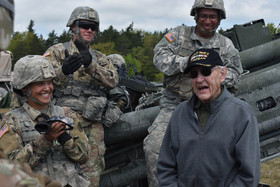 LATHAM, NY (12/20/2019) (readMedia)-- New York Army National Guard artillery Soldiers will attend a medal presentation for Charlie Brown, a 95-year old World War II veteran and a former member of the 1st Battalion, 258th Field Artillery who will be honored with the French Legion of Honor for his service in the Second World War today in Olean.

The French government presents the award for military merit to WWII veterans for valor and bravery during the Normandy and follow on campaigns that contributed to the liberation of France.

WHAT: Presentation of the French Legion of Honor

visuals of the presentation of the French Legion of Honor, along with interviews with Charlie Brown and modern New York Army National Guard Soldiers of the 258th Field Artillery. News media interested in attending the ceremony should contact Jack Drouin at jrdrouin53@hotmail.com

Brown was drafted into military service after graduating high school in 1943. Following his basic training at Fort Bragg, N.C., Brown qualified as a cannon crewmember and assigned to the 1st Battalion, 258 Field Artillery. He deployed in early 1944 aboard the RMS Queen Mary to Scotland for the coming invasion of Europe.

Brown and the regiment landed on Utah Beach in Normandy on July 1-2, 1944, moving to their first battle positions near Saint Come-du-Mont. The following day, Brown, assigned to the battalion fire direction center, recorded the first fire mission of the war for the 258th Field Artillery.

Brown fought through France, Belgium, Holland and Germany. His battalion supported the 30th Infantry Division's push through the Siegfried Line using direct and indirect fire, supported the 9th Army's crossing of the Rur River as part of Operation Queen in November 1944, the Battle of the Bulge in December, the XVI Corps crossing of the Rhine River near Wesel, Germany and the Battle of Magdeburg, site of German synthetic oil production synthetic oil on the Elbe River.

His last day of combat was May 4th, 1945 outside Magdeburg approximately 150 kilometers southwest of Berlin.

In 302 days of combat, Brown and the rest of the 258th Field Artillery had fought in four countries, crossed nine rivers, destroyed 34 German pillboxes, and fired a total of 33,902 rounds.

Brown's association with the modern era Soldiers of the 258th Field Artillery continued in 2018 with his participation in the fielding of new guns for the battalion, the 155 mm towed howitzer, the M777A2. Brown joined the battalion during annual training in May 2018 at Fort Drum, N.Y., to pull a lanyard to fire the first round of the new howitzer for the battalion.