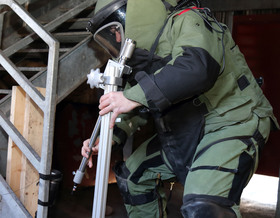 A member of the 1108th Ordnance Company training with local police in 2017.

GLENVILLE, NY (08/08/2019) (readMedia)-- Ten New York Army National Guard Soldiers based at the Glenville Armed Forces Reserve Center will be doing their annual training in Africa from August 12 to August 31.

The members of the 1108th Ordnance Company, who specialize in explosive ordinance disposal, will spent the two weeks in Kigali, Rwanda teaching members of the Rwandan Army how to counter improvised explosive devices.

The mission to Africa is part of the annual Shared Accord exercise sponsored by U.S. Africa Command.

The annual Shared Accord exercise is designed to improve interoperability between the U.S. military and African allied armed forces, as well as between African militaries themselves. The goal, according to U.S. Africa Command, is to enhance U.S. and African forces' capabilities to perform peacekeeping operations in support of United Nations and African Union mandates.

The training includes command post exercises, medical readiness exercises and field exercises like those the New York National Guard Soldiers will be involved in.

Soldiers from the 1108th have deployed to Iraq in 2010. In 2014 the 1108th deployed to Canada to assist the Canadian Forces in disposing of 5000 pounds of old bombs from a range in Goose Bay, Ontario.