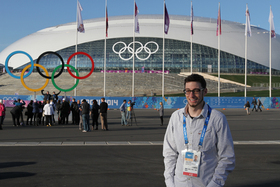 BANGOR, ME (02/17/2014)(readMedia)-- New England School of Communications (NESCom) graduates Brandon Gassett ('09) and Keith Bickford ('10) are at the Winter Olympics in Sochi, Russia working for EVS, a company that provides instant replay capabilities for live sporting events. The two graduates are helping to supply NBC and their broadcast affiliates throughout the world with world-class televised sports coverage of the 22nd Winter Olympic Games.

EVS has a system that records all media to a server and then manages the media/metadata. Professionals then have the opportunity to edit the content directly off their server, send it to a third party editing applications or play the content on air. The EVS system is being used at the IBC (International Broadcast Center).

"NESCom's ability to train students on the EVS system and help students get internships at EVS, resulted in them receiving full time positions," said Ben Haskell, Executive Vice President and Academic Dean at the New England School of Communications. "Their ability to contribute to large scale professional productions, like the Olympics, is a tribute to the educational quality available to students through NESCom."

The NESCom graduates arrived in Sochi three weeks before the opening ceremony to configure the systems. While the games are underway, their responsibility is to monitor the system and make sure it runs without any issues.

In addition to Gassett and Bickford, Nick Barrows ('12) is in NBC's new sports broadcast center overseeing the EVS operation for the Winter Olympics.

All three graduates studied video production while at NESCom. NESCom's Mobile Production Unit prepared them for this prominent international sporting event by giving them professional grade experiences in the functional, operational and technical aspects of live production.