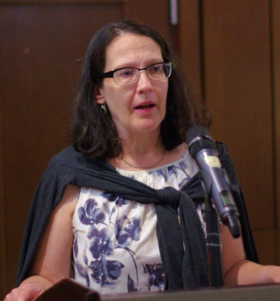 "Lorraine has been a tireless advocate for the rights of people who are subject to parole supervision and those who have been re-incarcerated for alleged parole violations," said NYSDA Executive Director Susan C. Bryant. "She has also shared her expertise in parole representation with NYSDA and the public defense community through training presentations, practice resources, and consultations," Bryant added. Examples given were a session entitled "Less is More Review and Practice" at NYSDA's 2021 Criminal & Family Defense Update last November and McEvilley's participation as one of several presenters at "A Whole New World of Parole Revocation" this spring.

"Lorraine is a lifelong defender, steadfast in her commitment to the people she serves," wrote Tina Luongo, Attorney in Chief of the Criminal Defense Practice at LAS. McEvilley began her public defense career at the LAS Manhattan Trial office as both a staff attorney and supervising attorney, Luongo recounted, later joining PRDU, "NYC's primary public defender representing people who were remanded at Rikers Island on parole revocation violations." Luongo stated that "[i]n that role and as the unit's Director, Lorraine's expertise in challenging carceral and parole systems helped lead NYS to pass the Less Is More Act."

McEvilley's participation in bringing about Less is More-and seeing it properly implemented-was a recurring theme in presentation of the award, as in written comments by Emily Singletary, Co-Executive Director of Unchained, on behalf of the #LessIsMoreNY Campaign: "Lorraine has been an invaluable partner to the #LessIsMoreNY campaign from its inception. She has been a leader in drafting, passing, enacting, and implementing the transformative Less is More Act to prevent reincarceration of people for technical parole violations, ensure robust due process rights for people accused of parole violations, and reward people who comply with the rules with early discharge from parole." Singletary, a leader in the Less is More movement who is not a lawyer, also praised McEvilley on a more personal level, saying that McEvilley "has taken the time to explain things to me and encourage me. She has never made me feel like an outsider and has consistently lifted up my work. She gives praise freely and is always gracious."

After the Less is More Act became effective on March 1st, LAS quickly filed a mass writ of habeas corpus against the New York State Department of Corrections and Community Supervision (DOCCS) on behalf of clients who were denied their rights to a release hearing guaranteed by Less Is More. McEvilley explained in a press release that "'DOCCS is simply violating the spirit and explicit intention of this transformative law by refusing to hold these release hearings for everyone in its custody ....'" She added that, given DOCCS unwillingness "'to afford our clients this due process, as clearly expressed by the law,'" the "'litigation is the only remedy to protect our clients and their newly enshrined rights.'"

McEvilley's concern for clients shines through other actions too, including during peaks of the COVID-19 pandemic. McEvilley told the New York Times in April 9, 2020, coverage of hearings being cancelled or delayed and gubernatorial releases falling short of an announced goal, "'[e]very day that they wait to release people is life-threatening at this point ....'" Over a year later, McEvilley spoke of a person who was being held on a technical parole violation for approximately a month when he contracted COVID-19 and died. "'He should have been released,'" she said. "'It's an illustration of the life-or-death situation people are in when they are locked up on parole violations.'"

The Jonathan E. Gradess Service of Justice Award, named for NYSDA's first Executive Director, commends individuals or organizations that have provided outstanding support to public defense and to NYSDA.