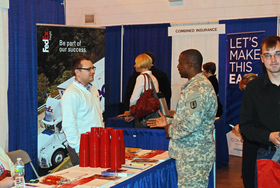 National Guard Sgt 1st Class Byron Barnes speaks with an employer representative during a Hire our Heroes job fair in Rochester in April this year.

CORTLANDT MANOR, N.Y. (09/09/2013)(readMedia)-- More than 50 companies interested in hiring veterans, members of the National Guard and Reserve and military spouses will take part in the "Hire Our Heroes" job fair being sponsored by the New York National Guard here on Tuesday, Sept. 10.

The event begins at 9 a.m. in Building 500 and ends at 1 p.m. Each employer must promise to have at least five job vacancies available to particpate in the event.

The Camp Smith event, is one of hundreds being held across the country co-sponsored by the U.S. Chamber of Commerce. The Sept. 10 jobs event is being co-sponsored by the New York State Department of Labor and the Employer Support of the Guard and Reserve (ESGR).

According to the United States Census more than 42,000 veterans live in Westchester County, while 5,500 live in Putnam County.

All potential employees will also have the opportunity to attend a workshop on how to best use job-searching tools. Similar events and classes were previously held in New York City, Buffalo, Syracuse and last month Farmingdale on Long Island.

Nearly 3 million Americans have served in the military since Sept. 11, 2001 --more than 40 percent of whom are men between the ages of 25 and 34. According to figures released in July by the Department of Labor, the unemployment rate for all post-9/11 veterans stood at 7.4 percent, compared with the national rate of 7.2 percent for all Americans.

Job seekers interested in participating in the Hire Our Heroes event can register here: https://hoh.greatjob.net/sc/viewEvent.action?id=858807

The New York National Guard sponsors the Hire Our Heroes events as part of effort to ensure that all Guard Soldiers and Airmen have good civilian jobs.

For access to this secure military facility members of the press must contact Major Alvin Phillips at 518-929-3775.