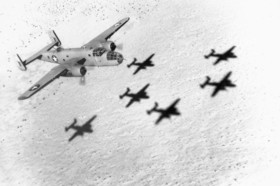 WHAT: Military honors for the homecoming of the remains of a former WWII Airman and Vermont native as he is transported home.

WHO: The dignified transfer of remains of Army Air Corps 1st Lt. Ray Fletcher. The remains will be escorted by Army Capt. Hugo Flores-Diaz.

WHERE: Albany International Airport. Media shall meet at the second floor security checkpoint. After clearing security, news media will stage on the lower level of Concourse A adjacent to the United Airlines gate.

For access to the Albany International Airport, news media must coordinate with the airport public information office, Mr. Doug Myers, 518-242-2230 or at DMyers@albanyairport.com PRIOR TO CLOSE OF BUSINESS on Tuesday, August 17 for a consolidated security access roster. Please coordinate directly with Albany Airport for media names.

On May 10, 1944 a B-25C Mitchell Bomber piloted by 1st Lieutenant Ray F. Fletcher of the 57th Bombardment Wing disappeared on the island of Corsica in the Mediterranean Theater during a routine courier flight. Local Corsicans reported a crash site to French police (Gendarmerie) just three day later.

In a week, a search team from the unit worked with local Corsican Genarmerie to discover wreckage in Southern Corsica more than 3,500 feet up in elevation among the peaks and boulders of Mount Cagna (also referred to as Punta di Monaco).

Four other personnel were lost on the aircraft when it is believed to have crashed into the mountainside due to poor weather.

In September of 1944, Army Graves Registration personnel reported making the difficult trek to the crash site and that remains there were non-recoverable due to the impact of the aircraft and post-crash fire.

A similar board of review in February 1948 also concluded that the remains of 1st Lt. Fletcher and accompanying personnel on board the aircraft to be officially declared not recoverable.

In the spring of 1989, 45 years after the crash, the Corsican Gendarmerie notified Army Memorial Affairs Activity in Europe that partial remains of crash victims had been recovered in 1988. A military investigation team visited the site in June 1989, concluding that no additional recovery work would be feasible at the site due to the hazardous and particularly difficult area for search and recovery.

The remains found by the Corsican Gendarmerie were turned over to the military's Central Identification Laboratory, Hawaii (CILHI) for analysis in 1995. At the time, these remains included no information correlating the wreckage or remains with a known incident or individuals. The accession was placed on hold in 1995, pending further evidence

French nationals again discovered remnants at the site in 2003 and 2004, turning over the additional non-biological items to CILHI in May, 2005. A Joint POW/MIA Accounting Command (JPAC) Team from the Department of Defense investigated the site in September, 2005, recovering additional human remains and personal effects.

Once analysis placed 1st Lt. Fletcher's remains with the crash site, CILHI and JPAG concluded in late 2009 that the remains recovered to be those of Fletcher and will be returned to his home state of Vermont as his final resting place.

Fletcher is survived by a cousin, Mrs. Rhette Fletcher.

Carolyn Chapin, a Red Cross Volunteer also on board the flight, was laid to rest in Woodbury, Conn. in August of 2009. Two other casualties from the crash were laid to rest in May to remember the 66th anniversary of the crash, Staff Sgt. Edwin Elliott in in Mattoon, Ill and Cpl. Richard Loring in Carver, Mass. Remains of the final casualty, Capt. Lewis Geerlings, were not recovered.