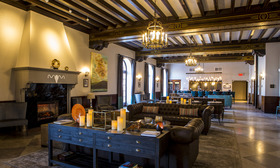 ALBANY, NY (04/11/2018) (readMedia)-- The Preservation League of New York State has selected the historic Hotel Saranac to receive an award for Excellence in Historic Preservation.

"Built in 1927 as a modern hotel for a growing, motoring middle class, the Hotel Saranac towers over the village's commercial district. In recent years, however, the hotel fell into disrepair and threatened to negate years of efforts to preserve the unique architecture and history of this walkable North Country downtown," said Jay DiLorenzo, President of the Preservation League. "The Roedel family, with deep roots in the community, took on this project with an unwavering commitment to historic preservation, beginning with the nomination of the hotel to the National Register. By combining Historic Tax Credit eligibility, an Empire State Development grant and private investment, Hotel Saranac once again provides first-class accommodations and warm and welcoming event spaces in a historic setting."

The odds seemed stacked against this project from the very beginning, when just two weeks into new ownership, a pipe burst and flooded the boiler room, electric panels and elevator shafts. But the project team pressed on, and layers of 20th-century alterations were stripped away, including acoustical ceiling grids, Masonite wall paneling and partition walls. Original terrazzo flooring was restored, as was cherry wood paneling in the Ballroom and the plaster barrel vaulted ceiling in the arcade. The revival of Hotel Saranac has proved a catalyst to the heart of the Village, bringing residents and visitors together to fuel a vibrant downtown.

Significant project support was provided by an Empire State Development Grant through the North Country Regional Economic Development Council. The project has been determined eligible for New York State and Federal Historic Tax Credits. Hotel Saranac secured Historic Hotels of America designation from the National Trust for Historic Preservation in 2017.

"We are appreciative and honored to receive this award from the Preservation League," said Roedel Companies CFO Fred B. Roedel, III. "Our project objectives were simple: properly and accurately preserve the historically significant elements of the Hotel, while also ensuring the final hotel product was relevant and economically viable. Recognition like this indicates we may have achieved our objectives."

"With our annual awards program, the Preservation League explores not just the present, but the future of historic preservation. Many of the 2018 award winners provide valuable examples for others by incorporating energy efficiency techniques, adaptive reuse strategies and use of Federal and State Historic Tax Credits," said DiLorenzo. "Each year, we are impressed by the number and variety of laudable nominations, and this year was no exception. We are delighted to celebrate the rebirth of the historic Hotel Saranac, and to commend all members of the project team for their leadership and vision."