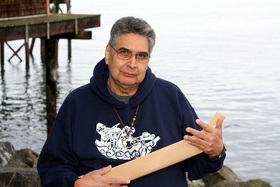 CORTLAND, NY (03/18/2010)(readMedia)-- Philip H. Red Eagle, who has immersed himself in indigenous cultural renewal for nearly 25 years and in the canoe movement since 1993, will visit SUNY Cortland on Wednesday, March 31.

Red Eagle will introduce and show the video documentary, "The Canoe Way: The Sacred Journey," at 7 p.m. in Sperry Center, Room 205. Afterward, he will discuss both the film and the movement with the audience.

His presentation, titled, "The Canoe Way of Knowledge: A Canoe Way of Life," is offered by the Native American Studies Committee of the College's Center for Gender and Intercultural Studies. The program is free and open to the public.

Red Eagle will discuss how the canoe journeys begun by himself and his late friend and mentor, Tom Heidlebaugh, have inspired others to use the journeys to reclaim their native heritage.

A widely exhibited artist and published book author, Red Eagle is a Salish-Dakota from Tacoma, Wash. He served with honor in the Alaska National Guard and later in the U.S. Navy from 1967-76, taking part in wartime tours in Vietnam. For his military service, the machinist mate 1st class received two medals and a commendation.

In the early 1990s while participating in an organization named The Cedar Tree Institute, he was initiated into the cultural "Potlatch" process. From 1994-95, he and Heidlebaugh organized the first of what would ultimately become the model for subsequent canoe journeys exploring Puget Sound along the state of Washington's coastline - a two-year, two-leg odyssey from the bottom of Hood Canal downward to Squaxin Island.

"The movement itself has gone from a few canoes and 50 people to over 100 canoes and 6,000 participants and a cultural resurgence that has brought depth and endurance to all the tribes and nations that have participated in these journeys," Red Eagle asserts. "They have found 'The Canoe Way of Knowledge and A Canoe Way of Life.'"

Heidlebaugh died in 1997, but Red Eagle and dozens of others influenced by him continue organizing canoe journeys, such as the one shown in "The Canoe Way." The documentary chronicles the annual tribal journeys of Pacific Northwest Coast Salish people in their cedar canoes. The 54-minute documentary DVD that was released in 2009 was directed, edited and filmed by Mark Celletti with Robert Satiacum serving as executive producer. Indigenous tribes and First Nation members from Oregon, Washington, Canada and Alaska are shown paddling along their ancestral pathways through the waters of Puget Sound, Inside Passage and the Northwest Coast. Families and youth reconnect with the past and each other. The participants reclaim the ancient songs, dances, regalia, ceremonies and language that were almost lost to the region's indigenous peoples.

"In this video, one sees happy faces and hears happy words about the canoe journeys that have been taking place since 1989," said Red Eagle. "There is power in these words. There is energy in these happy faces. Something worked."

He currently coordinates the Carvers' Camp for the Tribal Journeys Group and served as a carver on the camp's Gift Canoe Project, a 29-foot Salish hunter canoe that was donated during the Suquamish Potlatch in August 2009.

Red Eagle has a B.F.A. in metal design from the University of Washington and a B.A. in editorial journalism from the University of Washington. He wrote the award-winning novel Red Earth: A Vietnam Warrior's Journey, based on his own experiences, and co-published and edited The Raven Chronicles, a multicultural magazine of art, literature and the spoken word. His artwork in many different media has been exhibited at galleries and museums in California, Washington and New Mexico.

In addition to Native American Studies, the event is sponsored by the Campus Artists and Lecture Series, Auxiliary Services Corporation, Center for Gender and Intercultural Studies, and the Sociology and Anthropology Department. For more information, contact Dawn Van Hall at (607) 753-4890.