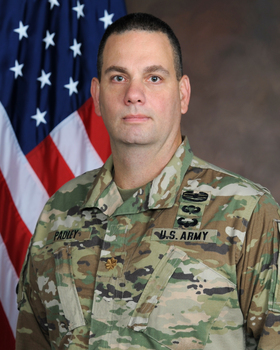 Padley replaces Lt. Col. Jason Souza, who has commanded the unit since 2015, is moving onto a new assignment. Members of the press are invited to cover the event.

WHAT: A formal change of command ceremony during which the colors of the 501st Ordnance Battalion will be transferred from Souza to Padley, signifying the formal transition of authority for the men and women of the battalion. The "colors" or flag of a military unit traditionally went with the commander on the battle field and this ceremony allowed the Soldiers to see their new commander.

Reporters will be able to interview the incoming and outgoing commanders. Video and still photo opportunities include the change of command ceremony and troops in formation.

Members of the media wishing to cover this event must contact Command Sgt. Major Kevin Conklin at 518-703-3095 for access to this secure military facility.

In 1996 Padley was commissioned as a second lieutenant through the Army ROTC program at Canisius College and entered the Active Army as a Chemical Officer in the 82nd Airborne Division. In 2000 he rejoined the New York Army National Guard's 1st Battalion 105th Infantry.

Padley has served in a number of positions to include chemical platoon Leader, support platoon leader, military police platoon leader, infantry company executive officer, infantry company commander, and in staff officer positions at the division, and brigade level. He has been serving as the rear detachment commander –a full time position- -for the 369th Sustainment Brigade while that unit was deployed to Kuwait in 2016/2017.

Padley deployed to Iraq in 2004/2005 as a platoon leader in the 442nd Military Police Company.

He is a graduate of the Army's Airborne and Air Assault courses, Command and General Staff College and the Support Operations Officer Course.

He and his wife Meg live in Armonk, N.Y. with their son Aidan and daughter Maeve.

Lt. Col. Jason Souza enlisted in the Army Reserve in November 1993. He received his officer's commission as a 2nd Lt. in 1998 from Marion Military Institute and served as a Tank Platoon Leader for Company D, 1st Battalion, 101st Cavalry in Newburgh New York.

In June 2000 Souza went on active duty where he served in a variety of leadership and staff positions with explosives ordnance disposal, including command time as an EOD Company Commander and division chief of the Improvised Explosive Device Division and Air Ordnance Division.

His military and civilian educations include the Army Command and General Staff College, and the Advanced Access and Disablement Course. He currently has a bachelor's degree from Oswego State University and a Master's from Park University.

Souza is the Director of Army Programs for the contracting firm PAE in his civilian career. He is from Fredericksburg, Virginia, and is married to Beth Souza. The couple have two children.

Based at the Glenville Armed Forces Reserve Center the 501st EOD battalion is a headquarters unit which is able to take control of two to five Explosive Ordnance Disposal companies in a combat zone. The 501st is the higher headquarters for the New York Army National Guard's 1108th EOD Company, also based at the Glenvile Armed Forces Reserve Center, along with EOD companies in Greenville, North Carolina, Camp Edward, Massachusetts, Camp Dawson, West Virginia, and Camp Grayling, Michigan.