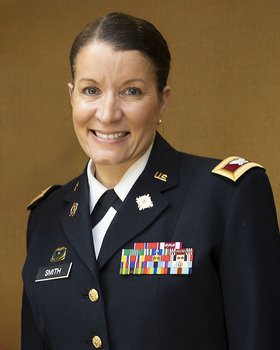 Smith has been selected to become the Director of Joint Staff for the New York National Guard.

Members of the press are invited to cover the promotion.

Members of the press will be able to interview Col. Isabel Rivera Smith following her promotion. The promotion will take place in the buildings atrium.

For access to this secure military facility, media members must all the Division of Military and Naval Affairs Press Office at 518-786-4518. This will be a socially distant event. Visitors must wear masks.

In 1995, Smith was commissioned as a Second Lieutenant in the Quartermaster Corps after graduating from Officer Candidate School.

Smith's key staff assignments include Assistant Operations Officer at the 27th Rear Area Operations Center; personalist for the 369th Corps Support Battalion, Assistant Chief of Staff for Personnel, G1 for the 53d Troop Command, Executive Officer of the 106th Regional Training Institute (RTI), Deputy Director of Logistics (J4) for the New York National Guard, Executive Officer for the Office of the Adjutant General, and Chief of Staff for the 53d Troop Command.

Smith was born and raised in Lorain, Ohio where she graduated from Admiral King High School.

She holds a bachelor's degree in Human Services from Mount St. Mary's College, a Master's degree in Education in Counseling and Development from Long Island University, and a Master's Degree in Strategic Studies from the United States Army War College.

Smith and her husband Peter have six daughters: Antoinette, Amelia, Karissa, Kassandra, Jessica, and Shannon as well as one son: Jamarr. They also have nine grandchildren.