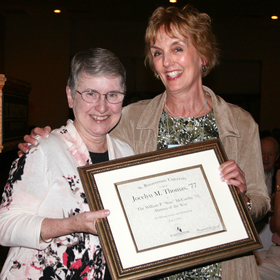 Thomas, a 1977 graduate, was presented the William "Stax" McCarthy Award. Named in memory of the former annual fund and alumni director, the award is presented annually to graduates whose continued service to the university reflects the spirit of St. Francis, St. Bonaventure and St. Clare.

Since 2006, Thomas has been director of communications for the Franciscan Friars Holy Name Province in New York City, the largest of seven provinces in the United States belonging to the Order of Friars Minor. In that role, she serves as the university's liaison with the province, assisting with events and communication.

Prior to joining the province, she worked as a communications specialist for Ciba Pharmaceuticals (now Novartis) and for Embryon, a medical education agency.

Thomas is involved with the Parkinson's Disease Unity Walk held in New York City each year. She has served as a director since 2000 and as secretary since 2001.

She served St. Bonaventure's National Alumni Association Board for six years and is a member of the Metro New York Alumni Chapter, lending continual support for university events in the New York City area. She is a Career and Professional Services volunteer and helps St. Bonaventure students secure internships with Holy Name Province. A regular Bonaventure Fund donor, Thomas was also an event volunteer for the university's 150th Anniversary Campaign.