John E. Coyne Named Chairman of the Board at Mount St. Mary's University 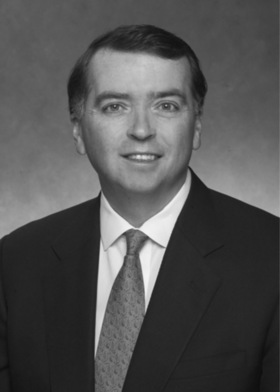 Coyne, Vice Chairman of Brinker Capital, a $16 billion investment management firm based in Berwyn, PA, is a long-time member of the Mount's Board of Trustees, most recently serving as Chairman of the Endowment Committee. He replaces outgoing Board Chair Emeritus, Eugene M. Waldron, Jr., C'64.

"John is a true Son of the Mount and his past leadership on the Board has been significant," said University President, Thomas H. Powell. "He brings a wealth of energy and commitment to this position, and I'm absolutely certain his alma mater will benefit from his service as Chairman. I look forward to working with John and members of the Board in strengthening the Mount for future success."

Located on 1,400 acres near historic Emmitsburg, Maryland, and within 90 minutes of Baltimore and Washington, D.C., Mount St. Mary's University is the second-oldest Catholic university in the United States. Recently selected as one of the top 25 colleges and universities in the region by U.S. News & World Report, the Mount is listed in the Newman Guide to Choosing a Catholic College as one of the top Catholic universities in the country.

"As our Mission Statement states, for more than 200 years, the Mount has cultivated a community of learners formed by faith, engaged in discovery, and empowered for leadership in the Church, the professions, and the world," said Coyne. "I am humbled to accept the mantle as Chairman, and working with President Powell, I am confident the Mount will continue to expand its forward momentum."

Coyne, who has 30+ years' experience in the investment management industry, has been with Brinker Capital since 1989. In that time, he's held several senior positions, including President, Chief Compliance Officer, and National Sales Director. During his tenure the firm's total AUM have grown to more than $16 billion and Coyne's been a leading driver behind the firm's entry into new marketplaces. Prior to joining Brinker Capital, Coyne held investment advisory and national sales positions at Butcher & Singer, Van Kampen, Morris Stone, Fidelity Leasing, and Mutual Benefit Capital Companies.

Coyne and his wife, Lyn, live in Devon, PA and have two daughters; Amy and Kelly.