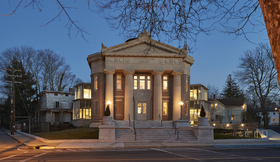 ALBANY, NY (05/03/2018) (readMedia)-- The Preservation League of New York State has selected the restoration of the John Jermain Memorial Library to receive an award for Excellence in Historic Preservation.

"We applaud the board and community's decision to restore and expand this historic and monumental library, repairing its eroded neo-classical façade, crumbling bricks, leaking Guastavino dome and stained glass laylight, and addressing health and safety code concerns," said Jay DiLorenzo, President of the Preservation League. "Despite the lengthy fundraising and rehabilitation process, project leaders forged ahead. Now, a new fully-accessible glass addition embraces the building on its tightly constrained site, while the original building's historic fabric – including bookshelves, furniture and hardware – have been restored to their late-Gilded Age glory."

Significant project assistance was provided by residents of the Sag Harbor School District who in 2009 approved nearly $10 million in bonding for the restoration of the 7,084 square foot building and the construction of a 7,267 square foot addition. An additional $6 million was subsequently raised to complete the project.

Located on the South Fork of Eastern Long Island, the John Jermain Memorial Library was commissioned and built by the philanthropist and suffragist Margaret Olivia Slocum Sage in memory of her grandfather, Major John Jermain, in 1910. One hundred years later, high winds and water had eroded the grand neo-classical façade, locally-fired bricks were crumbling, the historic Guastavino dome and laylight were leaking and quartersawn oak furniture was stained and split. The building was dark, portions were unheated, and the structure was not code-compliant. Rather than move to new construction, thousands of stakeholders rose up to support this beloved jewel of a library on Main Street, and in so doing, reinforced their commitment to the history of their community.

"The single biggest factor in the success of the John Jermain Memorial Library restoration was community support," said Catherine Creedon, the Library's Director. "From the June 2009 vote approving funds for the project, until the July 2016 ribbon cutting, this project belonged to the people of Sag Harbor. They believed in the value of our beautiful building, but even more importantly, they believed in the power of the public library to shape a better world."

"With our annual awards program, the Preservation League explores not just the present, but the future of historic preservation. Many of the 2018 award winners provide valuable examples for others by incorporating energy efficiency techniques, adaptive reuse strategies and use of Federal and State Historic Tax Credits," said DiLorenzo. "Each year, we are impressed by the number and variety of laudable nominations, and this year was no exception. We are delighted to celebrate the restoration of the John Jermain Memorial Library, and to commend all members of the project team for their leadership and vision."