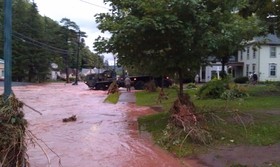 Soldiers of the 1156th Engineer Company traversed flooded areas to rescue some of the town of Windham's residents. Windham, N.Y. suffered flooding in the wake of Hurricane Irene.

WHAT: Presentation of the Greene County Proclamation of Honors to Soldiers of the New York Army National Guard.

Visual imagery of the presentation of the Greene County Proclamation with troops in formation. Interviews with leaders and Soldiers of the New York Army National Guard's 1156th Engineer Company.

About 120 Soldiers from the 1156th Engineers staged with other New York National Guard troops prior to the landfall of Hurricane Irene August 26, 2011 at Camp Smith and Kingston, N.Y. When flooding occurred in Windham and other communities, Soldiers were sent to aid civil authorities.

Just getting to the Emergency Operations Center near Windham proved a challenge to the troops. The company tried two or three times, using trial and error, to find an un-flooded route, said Capt. Daniel Colomb, company commander of 1156th Engineer Company.

The devastation was incredible, he recalled. The main street of Windham was virtually a river, and the floodwaters were strong enough to carry away cars and trailer homes, he said.

"I've never seen anything of this magnitude before," he said.

Assigned to rescue trapped civilians in Windham, the Soldiers had to get out of their vehicles, lock arms, enter the sometimes waist-deep water, and use baby steps to find safe fording sites free of drop-offs or other hazards, Colomb said. He described the delicate operation as "searching with our feet," and "hands across the river."

Once across these areas, the soldiers began to search for residents. They were guided by local authorities and some citizens, who pointed out where people were trapped, Colomb said.

For more information and imagery regarding the 1156th during Hurricane Irene, visit www.army.mil/article/64823/New_York_Army_National_Guard_Engineer_Soldiers_Walk_Through_the_Flood_to_Rescue_Residents/

The 1156th Engineer Company, which is based in Kingston and Camp Smith, specializes in vertical engineering; the construction of buildings and other basic facilities.

The CERFP is a team of 350 New York Army and Air Guard men and women, along with members of the New York Guard, the state's volunteer defense force. The CERFP is designed to relieve civilian first responders and sustain emergency rescue operations after an attack.

In addition to the unit's response to regional flooding this fall, the engineers also conducted demolition in downtown Kingston this past fall to prepare a training site for the November disaster response exercise.