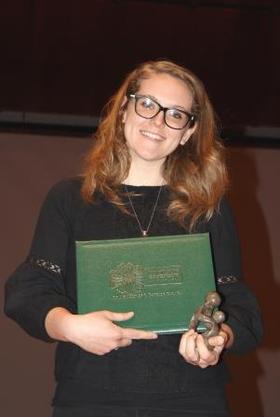 DANVILLE , IL (04/16/2019) (readMedia)-- Lakeview College of Nursing (LCN) recently honored one of their students and a faculty member with a DAISY award. This prestigious award was presented to Morgan Kelley, an LCN student from Nevada City, CA, and Shawna Storm, an LCN faculty member from Villa Grove, IL. They received the awards at the College's recent Research Day Event.

Kelley, a student on the College's Charleston Campus, may be fairly new to her role as a student nurse, but she has already been making an impact on the lives of others. "Recognizing the undeniable power of animal therapy in the betterment of patient morale and healing, Morgan volunteers her time with Pet Therapy, visiting patients on a Medical Surgical Unit at the hospital where she completes clinical rotation", stated Valerie Sader, RN, in her nomination submission. She also noted that Kelley is organizing a blood drive at Lakeview and also plans to volunteer in the emergency department of a local hospital. Additionally, Kelley enjoys helping migrant, immigrant, and refugee community members by tutoring them on the English language. Her plan for the future includes using her nursing degree to work and volunteer in underprivileged communities lacking medical access across the globe, according to Sader.

The faculty recipient, Storm, is a 2012 graduate of LCN and has been an instructor at the College since 2014. "Professor Storm is one of the smartest and kindest individuals I know. Not only has she expanded my knowledge of nursing but she has also been supportive of me with my personal struggles showing me just how much she truly cares about her student both academically and personally," said Lexie Sievert, current LCN student. Sievert also stated in her nomination about Storm that "She makes me want to be the best nurse I can be when I finish school and inspires me to believe in myself...I cannot emphasize enough all that she does for Lakeview and her students....I can honestly say she is one of the best instructors I have had in my entire school career."

Kelley and Storm were both presented with a DAISY award certificate, pin, and a Healer's Touch sculpture.

The DAISY Foundation is an acronym for Diseases Attacking the Immune System. The DAISY Foundation was established in 1999 in memory of J. Patrick Barnes who died at the age of 33, from complications of an auto-immune disease. Patrick's family was very touched by the remarkable compassion and clinical skill demonstrated by Patrick's nurses during his illness, so they created DAISY to recognize exceptional nurses everywhere. This is the first year that LCN has partnered with DAISY to present awards to extraordinary nursing students and faclulty members.

More information about the DAISY award and LCN's online nomination form can be found at https://www.lakeviewcol.edu/daisy-award.