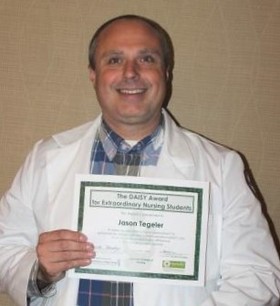 DANVILLE , IL (12/05/2019) (readMedia)-- Lakeview College of Nursing (LCN) recently honored a student and a faculty member with a DAISY award. This prestigious award was presented to Jason Tegeler, an LCN student from Paris, IL, and Stacy Ordner, an LCN faculty member from Sigel, IL. They received the awards at the College's recent Research Day Event.

Tegeler, a student on the College's Charleston Campus, is recognized as someone who is the first to volunteer not only in the clinical arena, but also by giving back to his community. "He brings a love for patient care to the bedside which shows in the values he displays," according to Associate Lakeview College of Nursing Professor Rita Wallace. Wallace, who nominated Tegeler for the award, also noted the values of honesty, integrity, service, and excellence when speaking about how he has impacted those around him.

The faculty recipient, Ordner, is a 2009 graduate of LCN and has been an instructor at the LCN since 2014. She was noted as a role model as well as an outstanding nurse, teacher, and provider within the nomination received from one of her students, Deedra Morris. "This is a woman who has an intense passion for nursing, and you can see it in all that she does each and every day...She represents what it is to be an excellent nurse, continually pushing for nothing less than the best for both her students and her patients," explained Morris.

Tegeler and Ordner were both presented with a DAISY award certificate, pin, and a Healer's Touch sculpture.

The DAISY Foundation is an acronym for Diseases Attacking the Immune System. The DAISY Foundation was established in 1999 in memory of J. Patrick Barnes who died at the age of 33, from complications of an auto-immune disease. Patrick's family was very touched by the remarkable compassion and clinical skill demonstrated by Patrick's nurses during his illness, so they created DAISY to recognize exceptional nurses everywhere. LCN has partnered with DAISY to present awards to extraordinary nursing students and faclulty members.

More information about the DAISY award and LCN's online nomination form can be found at https://www.lakeviewcol.edu/daisy-award.