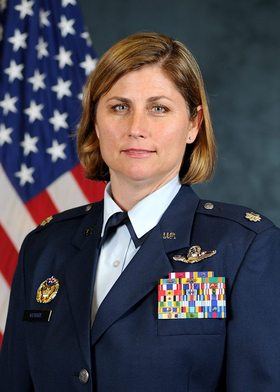 Kilgore graduated from the United States Air Force Academy in 1992, where she earned a Bachelor of Science in political science. She also earned a Master of Arts in National Security Studies from California State University at San Bernardino.

While on active duty, she attended T-37/T-38 flight training school in 1993 and then went on to train as a KC-10A pilot, which she flew until 1997. Following her time in the KC-10A, Kilgore underwent initial qualification training on the C-12J and eventually became an instructor pilot at Osan, Air Base, South Korea.

In 2004, Kilgore left active duty and came to the 174th Attack Wing, Hancock Field Air National Guard Base, Syracuse, New York, where she held a number of positions.

Kilgore and her husband Col. Robert Kilgore, wing commander for the 107th Airlift Wing, in Niagara Falls have two daughters, Erica and Abigail.