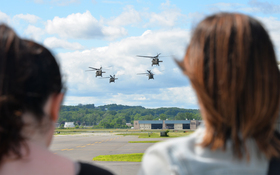 LATHAM, NY (06/10/2022) (readMedia)-- One hundred New York Army National Guard Soldiers officially said goodbye to their families on Thursday, June 9 in Latham, before heading off on a 11-month mission that will take them to Kuwait and other locations in the Middle East.

The unit flies the UH-60M Black Hawk helicopter which can carry ten passengers along with a crew of four Soldiers.

The assault helicopter battalion is deploying 250 people. They will go first to Fort Hood, Texas for additional training and then to Kuwait. The unit will provide helicopter support to United States Army forces operating in the Middle East under the control of United States Central Command.

One hundred and fifty Soldiers took part in another farewell event in Ronkonkoma on Long Island on Thursday morning at the flight facility there.

Following the farewell ceremony, half of the Soldiers launched in 11 UH-60 helicopters headed for Fort Hood. It will take the aircraft four days to fly from New York to Fort Hood. Once there the aircraft will be shipped overseas. The New York Army National Guard Soldiers will use other helicopters for post mobilization training.

The other Soldiers left for Fort Hood on Friday morning on board a chartered airliner.

The Soldiers are expected to train at Fort hood for about two months and will spend nine to ten months in Kuwait.

Major General Michel Natali, the assistant adjutant general, Army for the New York National Guard, told the Soldiers that he was confident of their ability to handle the missions that would come their way during the deployment.

"You are doing what we need you to do," he told the Soldiers.

Natali also assured their spouses and families that the National Guard family support team would be there for them while their Soldiers serve overseas.

The Thursday farewell events in Latham and Ronkonkoma mark the start of a summer full of deployments for the New York Army National Guard, Natali said.

By fall over 2,800 Soldiers will be serving in the Horn of Africa, the Middle East and in Europe, Natali said.

On Tuesday, 1,100 Soldiers will be mobilized for a mission providing security at United States military bases in Djibouti and other countries in East Africa.

The 3rd Battalion, 142nd Aviation deployed to Iraq in 2008-1009 and to Kuwait and the Persian Gulf area in 2013-2014. The battalion also deployed aircraft and crews to Puerto Rico in the wake of a 2017 Hurricane to provide aid.

The battalion's aviators have been involved in New York State responses to Super Storm Sandy in 2012 and Hurricanes Irene and lee in 2011. The battalion also deployed 60 Soldiers and four UH-60 helicopters to Puerto Rico to assist in post-Hurricane Maria relief operations in 2017.

Aircrews assigned to the battalion are also called upon to conduct firefighting operations when the New York State Police aviation unit requires assistance.