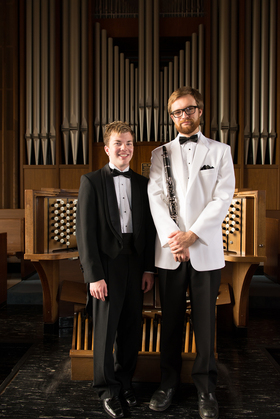 ANNVILLE, PA (11/12/2013)(readMedia)-- Lebanon Valley College presents a concert by the College's orchestra on Sunday, Nov. 17 at 3 p.m. in Lutz Hall of the Blair Music Center. The performance is free and open to the public.

Directed by Dr. Hannes Dietrich, professor of instrumental music, the orchestra will cover a program featuring music from the late Classical period through the 20th century. The concert will open with Beethoven's "Coriolan Overture, Op. 62," followed by "Concertino for Clarinet and Orchestra" by Carl Maria von Weber. This piece is one of the standard concertos for the clarinet and will showcase the wide-ranging talents of Concerto-Aria competition winner and LVC junior Steven Christ.

The first half of the program will conclude with three movements from Morton Gould's "Latin-American Symphonette." Dietrich calls Gould one of the great American composers of the last century, and in honor of the 100th anniversary of his birth, the orchestra will play the "Rhumba," "Tango," and "Guaracha" movements from that piece.

On playing a solo in front of a large crowd, Christ says, "Playing in a practice room gives you the comfort of no one hearing you through a shut door and concrete walls. Playing for your friends is still on a semi-comfortable level because they are your friends and they want the best for you. Playing for an audience of people you did and did not invite is an extremely terrifying thing. The fact that if you mess up or squeak, that everyone's going to hear it and comment on it later. You just have to remember that the audience came to hear a wonderful concert and wants you to succeed. They want you to make a wonderful impression. Play your best and play for yourself. The audience will have their own opinion."

The second half of the program begins with the "Toccata Festiva for Organ and Orchestra" by Samuel Barber. "This is one of the great, and most challenging works for organ and orchestra," Dietrich said, and will be performed by organist, Concerto-Aria competition winner, and LVC senior Tyler Canonico.

"The Barber Organ Concerto is a difficult organ work not only for the organist but also for the orchestra. I'm thrilled that Dr. Dietrich was willing to undertake this major work," Canonico said. Shelly Moorman-Stahlman, professor of music, College organist, and Canonico's instructor said, "Watch for Tyler's pedal solo in the cadenza!"

The College will be renting a large organ for his performance.

The concert closes with the second movement from the "Symphony No. 3" by Camille Saint-Saens.

Steven Christ started playing the clarinet at ten years old at the direction of his father and credits his parents, talented musicians themselves, for getting his music career started. He plans to attend graduate school after LVC and has dreams of one day playing with a major orchestra and running his own clarinet studio. Steven cites LVC professor Beverly Butts as his biggest inspiration. "I knew I had musical talents, but I didn't really know what I wanted to do with my life. After hearing Professor Butts play Bach's 'Chromatic Fantasia' I knew I needed to be here, taking clarinet lessons from her, and wanting to be just like her," he said. "Professor Butts has helped me grow to play much better than I ever could have without her. I thank her for the encouragement, growth, and continued support through my journey to being a professional clarinetist."

Attending church with his parents every Sunday opened Tyler Canonico's eyes to his love for the organ. He started playing it at 12 years old and calls it "a powerful and beautiful instrument." He is the director of traditional music and prganist at the First United Methodist Church of Palmyra and holds the position of vice president and concert director of the LVC Organ Guild. He won the American Guild of Organists Regional Convention Organ Competition, earning him features at the American Guild Organists National Convention in 2012 and at the AGO Regional Convention in 2013, where he played to rave reviews. Canonico continues to keep busy as a recitalist.