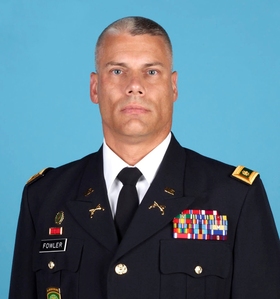 BUFFALO, NY (05/19/2017) (readMedia)-- New York Army National Guard Lt. Col. Michael Fowler, a town of Greece resident and commander in the Monroe County Sheriff's Department and Iraq War veteran, will take command of the 153rd Troop Command on Sunday, May 21 during a ceremony at D'Youville College in Buffalo.

The 153rd Troop Command is responsible for military police and support units in western New York. The command was responsible for the National Guard's response to the November, 2014 "Snowvember" snow storm.

Fowler replaces Col. James Freehart who has commanded the unit since April, 2014.

WHO: Lt. Col. Michael Fowler, the incoming commander; Col. James Freehart, the outgoing commander; Brig. Gen. Michel Natali, the commander of the 53rd Troop command who will preside over the ceremony; and the Soldiers of the 153rd Troop Command.

WHAT: The 153rd Troop Command will conduct a traditional change-of-command ceremony in which the colors, or flag, of the unit will be transferred from Freehart to Fowler. This signals the change of authority and responsibility for the actions of the unit. Historically an Army unit's colors marked the location of the commander on the battlefield. The change-of-command ceremony allowed the unit's soldiers to see who they would be following in combat. Natali, the commander of the 53rd Troop command will transfer the colors from Freehart to Fowler during the ceremony.

Video and still imagery of the change-of-command ceremony, and interviews with the incoming and outgoing commanders.

Lt. Col. Michael Fowler LTC Michael Fowler entered military service through the ROTC program at SUNY Brockport. He was commissioned a Second Lieutenant in 1990 and was assigned to the 206th Military Police Company as a Platoon Leader.

From 1999 – 2000 Fowler took Command of Military Police Units assigned to Task Force Eagle in Bosnia-Herzegovina. In 2001 he commanded the Military Police Task Force response to the terrorist attacks at Ground Zero, coordinating with local, state and federal agencies during the rescue and recovery efforts.

In 2003, Fowler deployed on a second tour as the 105th MP Co Commander to Operation Iraqi Freedom, where the unit served 12 months in the Sunni Triangle.

During Fowler's time with the 102nd Military Police BN he served on two State Active Duty deployments, responding to domestic emergencies for both Hurricane Irene and Super Storm Sandy.

In his civilian career Fowler holds the rank of Commander with the Monroe County Sheriff's Office Road Patrol. He resides in the Town of Greece with his wife Dara, and their daughter Ashley.

The 153rd Troop Command is based at the historic Connecticut Street Armory in Buffalo and is the higher headquarters for the 102nd Military Police Battalion, the 204th Engineer Battalion and the 501st Explosive Ordnance Disposal Battalion. The command is responsible for overseeing National Guard emergency response operations in western New York in conjunction with the 107th Attack Wing of the New York Air National Guard.

During the November 2014 "Snowvember" storm the Soldiers of the 153rd Troop command cleared snow and provided relief across the region.