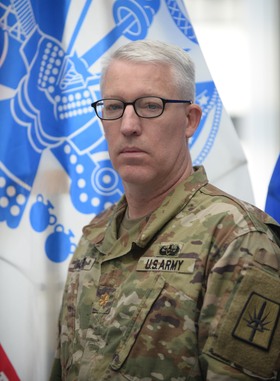 GLENVILLE, N.Y. (06/06/2019) (readMedia)-- Major Doug Baker, a Porter Corners resident, Troy native, and veteran of the Iraq War and the campaign against the Islamic State, will take command of the New York Army National Guard's 501st Ordnance Battalion during a change of command ceremony at the Glenville Armed Forces Reserve Center on Friday, June 7.

He replaces Lt. Col. Henry Padley who has led the battalion since 2017. Padley is moving to a new job as operations officer for the New York Army National Guard's 53rd Troop Command.

The battalion's mission is to manage the employment of explosive ordnance disposal units in combat. These are the elements in the Army and other services who are called upon to remove improvised explosive devices in combat.

Members of the media are invited to cover the traditional change of command ceremony.

WHAT: A traditional change of command ceremony during which the flag, or colors, of the battalion, will be transferred from Padley to Baker. The location of the unit's colors, indicated where the commander was on the battlefield. The traditional ceremony was designed so that Soldiers would know who they were to follow in battle.

Members of the press can obtain still and video footage of the traditional ceremony and interview the incoming and outgoing commanders about the unit and its mission.

For access to this secure military facility, members of the media must contact CPT Salvatore Cautela at 518-220-4112.

Major Doug Baker was born in Troy, N.Y. and enlisted in the Army in August 1984. After completing his active duty service, he transferred to the New York Army National Guard and then the Army Reserve before leaving service in 1992.

He has served in a number of leadership positions to include headquarters detachment commander, battalion personnel officer, logistics officer, and operations officer and executive officer. He is currently serving as the 501st Ordnance Battalion operations officer.

Baker deployed to Honduras in 1985 and deployed to Iraq as the executive officers of the 501st Ordinance Battalion in 2010. He deployed to Iraq and Syria in 2018 as part of the military campaign against the Islamic State where he served as operations officer for the Counter-IED Directorate.

Baker has also responded to emergencies here at home, to include Operation Noble Eagle, the post-Sept. 11, 2001 security operation in the United States, and the state response to Hurricane Sandy in 2012.

Baker's is a graduate of the Explosive Ordnance Disposal School, and the Army Command and General Staff College He holds a Bachelor of Arts degree in Organizational Management from Nyack College

Baker and his wife Pam reside in Porter Corners, New York. He has three children Benjamin, Rachel and Samuel and two stepsons Hayden and Bailey.

In 1996 Padley was commissioned as a second lieutenant through the Army ROTC program at Canisius College and entered the active Army as a Chemical Officer in the 82nd Airborne Division. In 2000 he rejoined the New York Army National Guard's 1st Battalion, 105th Infantry.

Padley has served in a number of positions to include chemical platoon Leader, support platoon leader, military police platoon leader, infantry company executive officer, infantry company commander, and in staff officer positions at the division, and brigade level. He has been serving as the rear detachment commander –a full time position– for the 369th Sustainment Brigade while that unit was deployed to Kuwait in 2016/2017.

Padley deployed to Iraq in 2004/2005 as a platoon leader in the 442nd Military Police Company.

He is a graduate of the Army's Airborne and Air Assault courses, Command and General Staff College and the Support Operations Officer Course.

He and his wife Meg live in Armonk, N.Y. with their son Aidan and daughter Maeve.

Based at the Glenville Armed Forces Reserve Center the 501st EOD battalion is a headquarters unit which is able to take control of two to five Explosive Ordnance Disposal companies in a combat zone.

In 2018, 17 501st Ordnance Battalion Soldiers deployed to Afghanistan and manned the headquarters of Task Force Explosive Ordnance Disposal. They were responsible for oversight of explosive disposal (EOD) teams operating in 20 Afghan provinces.