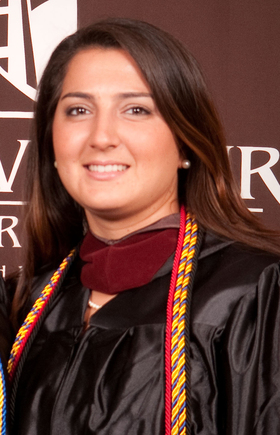 Marin Salcedo was recognized on Saturday, May 12, at the university's Honors Ceremony and again Sunday, May 13, during St. Bonaventure's 152st Commencement Exercises.

The Ideal Bonaventure Students exemplify the spirit of St. Bonaventure and the ideals of St. Francis through community service and academic excellence. They are selected by a committee that considers nominations from the campus community.

Marin Salcedo, daughter of Drs. Alberto Marin and Teresita Salcedo of Weston, Fla., earned an honors degree in journalism and mass communication and minors in Italian and English.

An honors student and a Division I athlete, Marin Salcedo approaches the tennis court and her studies with the same care, competence and precision.

Marin Salcedo played the No. 1 position on the tennis team since her freshman year, leading the team as captain this season. This year, she posted 23 wins, including a team-best 14 doubles victories.

Her 23 overall wins were second-best on the Bona roster, and her 14 doubles victories led the Brown and White. She posted a 14-6 doubles record on the year, with all but one match occurring at the No. 2 doubles slot.

Marin Salcedo is as fearless with her camera as she is with a tennis racket.

As a youngster, she traveled to several nations in the Mideast where she trained to be a professional diver and to South America as a competitor in international tennis tournaments. She routinely immersed herself photographically into the cultures.

For her Honors Project, Marin Salcedo spent eight weeks of fieldwork in the small coastal village of Rincón del Mar, Colombia. She immersed herself in the culture, lives and laughter of the villagers, attempting not only to witness, but experience what it is like to be a resident of Rincón. The final product was a glimpse at the villagers' lives, from beginning to end, through an extensive series of interviews and photographs.

In August and September 2011, she interned at PHOTO magazine in Paris, where she drew on her language skills to conduct and translate interviews in French, Spanish and English. She also wrote book reviews and two cover stories for the magazine (in French) that were published in September.

"Manuela is among the finest undergraduate writers and thinkers I have ever coached," said Dr. Denny Wilkins, who was Marin Salcedo's academic adviser and professor in four courses. Wilkins also served as the university's faculty athletics representative.

"Manuela has shown the skills, aptitude, humanity, social grace and emotional resolve needed to perform under pressure in a world that has difficult problems to solve and needs capable people to solve them," said Wilkins.

In addition to being named an Ideal Bonaventure Student, Marin Salcedo was the recipient of the 2012 Dr. Mary A. Hamilton Woman of Promise Award and the Father Cornelius Welch Award for Achievement in Photography.

She plans to attend graduate school this fall at Syracuse University, where she will study photojournalism.