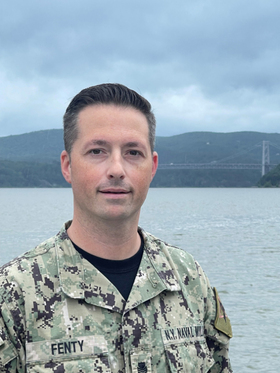 He lead's a three person Naval Militia team along with one armed National Guardsman as the only routinely weaponized unit within MEBS. Fenty has also lead initiatives in such maintenance that has saved the New York Naval Militia money and has improved standards and procedures for boat readiness.

Fenty, who is originally from the Bronx, began his military career in 2000 when he joined the Coast Guard Reserve being based first in Queens, New York, then at the Merchant Marine Academy in Kings Point, New York. Getting into machinery tech in 2005, this led to him getting a job with the Staten Island Ferry which he has worked at since.

In 2012 he joined the New York Naval Militia and by 2018 became part of Joint Task Force Empire Shield, New York's state active duty force stood up after 9/11 that deters and prevents terrorist operations in the New York City metropolitan area.