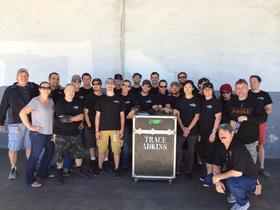 "NESCom's curriculum is built on experiential learning, but having the opportunity to work on a cruise ship for a week, and being the stage crew for a multi-band festival, gives them the experience of a lifetime," Ferguson stated.

The cruise is a floating cavalcade of country music stars with stops in Jamaica, Grand Cayman and Cozumel, Mexico. At the heart of this great opportunity, which takes place on the Norwegian Pearl, is hands-on work in live sound as the cruise features performances by 25 leading country music acts.

This opportunity is made possible through a partnership with Cruise Production, a company founded by 1990 NESCom alum Tim Cabral. Tim Cabral worked for Carnival Cruise Lines for many years before starting his own business. Ferguson stated, "this was a fantastic experience for students. It's a great opportunity for seniors to network, and all of the students that participated walked away with employment offers."

Posted Friday January 24, 2014 at 07:45 am by New England School of Communications of Husson University