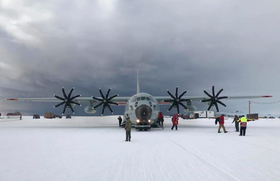 Airmen prepare for the launch of an LC-130 "Skibird" assigned to the New York Air National Guard's 109th Airlift Wing in Antarctica on February 8, 2021.

One plane already left Stratton and two more are expected to depart on November 15.

The 109th Airlift Wing flies the largest ski-equipped aircraft in the world and the wing plays a key role in supporting climate science research and other scientific activities conducted in Antarctica.

The Airmen will be operating out of the National Science Foundation's McMurdo Station, flying missions throughout the continent to move personnel and supplies, from December to February.

COVID-19 health restrictions will require quarantines and longer than normal layovers along the route from Stratton Air National Guard Base outside Schenectady, New York, to Christchuch, New Zealand. Airmen will also be tested repeatedly to ensure they have not contracted COVID-19.

Once Quarantine has been completed, the Airmen will do multiple aircraft checks in New Zealand before they fly to McMurdo Station, on Antarctica's Ross Peninsula.

"We comply with the host nation's COVID-19 protocols while we are in New Zealand and there will be additional protocols that pertain to McMurdo as part of the Operation Deep Freeze process," explained Maj. Shay Price, the wing's Antarctic operations officer.

The 109th's primary mission for the 2021-2022 support season will be Providing resupply to science stations on the West Antarctic Ice Sheet, the Siple Dome Field camp, and the Amundson-Scott South Pole Station, according Price.

The remote field camps serve as aviation hubs and refueling points for travel throughout the continent as well as scientific research in West Antarctica. The Amundsen-Scott South Pole Station is a National Science Foundation research facility located at the geographic South Pole.

At the end of the season the wing's Airmen will make intercontinental trips from Christchurch, New Zealand to McMurdo Station.

"Until the end of January, we will stay on the continent and fly on continent missions," said Price. "This time frame is what we typically call the 'wheeled gap'."

The "wheeled gap" is when conditions prohibit wheeled aircraft from operating, and ski-equipped aircraft are the only option for airlift.

Normally shifts of Airmen rotate through McMurdo Station, and a typical Antarctic season runs from October through March. This year the same 184 Airmen will remain on location throughout the three-month support season.

During the 2020-2021 support season, the 109th's Aircraft staged in New Zealand and flew the minimum amount of missions needed to support resupply efforts. These changes were made to control the spread of COVID-19.

Eventually, the 109th Airmen completed six missions in Antarctica during the shortened 2020-2021 season. They flew three medevac missions, transported 148 researchers and support staff, and delivered 63,000 pounds of critical cargo to research stations within the continent.

The LC-130s flown by the 109th Airlift Wing operate as part of Operation Deep Freeze, the military support of the U.S. Antarctic Program.

The unique capabilities of the ski-equipped LC-130 aircraft make it the only one of its kind in the U.S. military that are able to land on snow and ice.