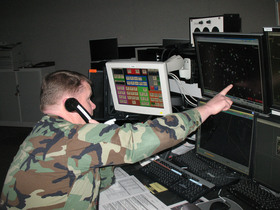 EADS is performing its homeland defense mission of detecting, identifying, tracking and possibly scrambling aircraft. Although held in Georgia, members from the unit will control the exercise missions from Rome, N.Y.

"EADS has been involved in every aspect of planning for this exercise," said Lt. Col. David Bartczak, an Operations Flight Commander at EADS. "We've been attending meetings and coordinating on documentation for almost a year. We will be providing air sovereignty and executing counter-air operations over Savannah."

The exercise is part of Ardent Sentry 10, a Chairman of the Joint Chiefs of Staff-directed, NORAD-NORTHCOM-sponsored homeland defense and defense support of civil authorities exercise. Deployable-Integrated Air Defense System (D-IADS) assets will be brought from South Carolina to the Savannah area where they will remain throughout the duration of the exercise.

D-IADS will be used to demonstrate a rapidly deployable air defense system that could protect high profile national targets against cruise missiles and other low-flying threats. The system is operated by Soldiers of the 263rd Army Air and Missile Defense Command located in South Carolina.

More than 200 Soldiers, Airmen, and Coast Guardsmen are involved in the exercise based at the Savannah Air National Guard Base. Also, a U.S. Navy destroyer will patrol Georgia coastal waters, and military fighters and helicopters and federal aircraft will cruise the skies while participating.

Close coordination will be maintained with the Federal Aviation Administration throughout the exercise as Air Force, Customs and Border Protection and Civil Air Patrol, along with U.S. Coast Guard and National Guard jets, fixed-wing aircraft and helicopters fly in the local area.

Air Force F-16s will provide interdiction of high and fast aircraft while a Customs and Border Protection Cessna Citation (C-550) and USCG H-65 Dolphin helicopters will be responsible for the interdiction of low and slow aircraft.

The U.S.S. James E. Wilson (DDG-95), a U.S. Navy Aegis-equipped destroyer which uses computers and radars to track and destroy enemy targets, is currently scheduled to participate in the exercise. The ship will patrol out to sea off the Georgia coast.