1st Battalion, 258th Field Artillery's A Battery is based in New Windsor. 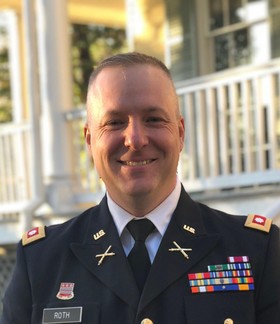 CAMP SMITH TRAINING SITE (11/03/2021) (readMedia)-- The New York National Guard's only field artillery battalion, which has a company based at the New Windsor Reserve Center, gets a new commander on Saturday, Nov. 6, during a ceremony at Camp Smith Training Site.

The 258th Field Artillery is normally headquartered at the Jamaica, Queens Armory, and has elements in the Bronx, and Harlem, as well as New Windsor. The battalion is now operating at Camp Smith Training Site while the facilities in the Bronx and Jamaica are renovated.

Members of the press are invited to cover the change of command at 3 p.m. on Saturday, Nov. 6 at Camp Smith on Route 202 in Cortlandt Manor.

The traditional change of command ceremony will involve Roth accepting the battalion's flag, or colors, from the commander of the 27th Infantry Brigade Combat Team, Col. Sean Flynn, symbolizing the transfer of command.

A units colors indicated the position of the commander on the battlefield and the traditional ceremony allowed the soldiers to see who they would follow in combat.

Members of the press seeking access to this secure military facility must contact Major Jean Kratzer at 518-496-7150 or e-mail @ jean.m.kratzer.mil@mail.mil.

Roth who joined the Michigan Army National Guard after earning a commission through ROTC in 2001, has served as a battery commander, and as the 1st Battalion, 258th Field Artillery operations office and executive officer.

While assigned to the Michigan Army National Guard he deployed with the Multinational Force and Observers, a peacekeeping force established in 1981 as part of a treaty between Israel and Egypt.

While deployed to the Middle East with the 42nd Infantry Division in 2020, he served as the deputy officer in charge at a training center in Jordan.

In civilian life Roth is the Deputy Commissioner of the New York City Department of Veterans Services. He is currently on leave from his civilian job serving on State Active Duty supporting special projects for the New York National Guard.

Roth holds a Masters of Public Policy and Urban Planning from the Harvard Kennedy School and Harvard Graduate School of Design and a Bachelor of Arts degree from James Madison College at Michigan State University.

He is a graduate of the Army Command and General Staff College and is enrolled in the Army War College.

Lindemann was commissioned in April of 2004 and has served in a variety of command and staff positions in both the Active Army and the New York Army National Guard.

Past assignments Active Army include; fire direction officer and the platoon leader at Fort Hood, Texas and a deployment to Iraq.

In the New York Army National Guard, he has served as the battalion intelligence officer and the battery commander of Bravo Company and the executive officer of the 258th Field Artillery.

Lindemann's last assignment before commanding the 258th was serving as operations team chief of the 53rd Digital Liaison Detachment.

Lindemann is an honor graduate of both the Field Artillery Basic Course and the Field Artillery Captains' Career Course. He graduated the US Army Command and General Staff College Intermediate Level Education and was again awarded honor graduate with a nomination for the Pershing Award at the Command and General Staff College Advanced Operations Course.

Lindemann resides in Miller Place, NY with his wife Candace and has four children, Lilah, Marc, Conrad, and Cyrus.