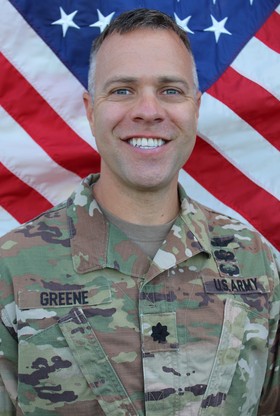 Members of the press are invited to attend.

WHAT: Traditional change-of-command ceremony in which Lt. Col. Lefton will hand the battalion flag, also known as the colors, to Lt. Col. Green to mark the transition from one commander to another. The 3rd Battalion, 142d Assault Helicopter Regiment is headquartered in Ronkonkoma and has elements at McArthur Airport in Ronkonkoma and Albany International Airport.

Troops in formation and interviews with the incoming and outgoing commanders.

Members of the press can attend the ceremony by contacting Cpt. Stephanie Fernandez at 347-326-4296

Greene, a Massachusetts native, earned his Army commission in 2000 from the University of South Alabama after graduating from Spring Hill College.

Greene is trained as a pilot in the OH-58D and UH-60 helicopters and has amassed over 2,000 flight hours. He has served as an assistant operations officer, airspace management officer, executive officer, and personnel officer.

He led an Air Cavalry Platoon in Iraq during the invasion of that country in 2003 as a member of the 2nd Squadron 17th Cavalry Regiment. He served with that unit in Iraq a second time in 2006-2007.

In 2009-2010 he deployed to Afghanistan as the commander of a Wyoming Army National Guard Medical Evacuation Company.

Lt. Col. Jason Lefton earned his commission in June of 1996 from Marion Military Institute and joined the New York Army National Guard in August 1996. Lefton began his career as a Field Artillery Officer and became a helicopter pilot in November 2000.

He has commanded the 3rd Battalion, 142nd Assault Helicopter Regiment since 2017 and will now serve as the New York Army National Guard State Army Aviation Officer.

Lefton has served in Bosnia and Herzegovina, and Kuwait and Iraq. During his command the 3rd Battalion, 142nd Aviation deployed to Puerto Rico to provide support following Hurricane Maria in 2017.

The Battalion also conducted training at the National Training Center in the California desert in 2018.

He is a graduate of the Army Command and General Staff College the Advanced Operations & War fighting Course, and the Aviation Maintenance Manager Course.

Lefton and his wife Heather live in Niskayuna, New York near Albany, and have two sons, Mack Levi and Seth Gage.

The 3rd Battalion, 142nd Attack Helicopter Battalion traces its heritage back to 1947 with the formation of a fixed wing aviation detachment of L-19 Bird Dogs assigned to Miller Field in Staten Island, New York.

Over the years and through several additional re-organizations, the 42nd Aviation Battalion, in 1985, had over 1000 personnel and 125 aircraft that included the AH-1 Cobra, OH-6 Cayuse, and UH-1 "Huey".

Further restructuring in 1995 led to the deactivation of some units and the creation of the 3rd Battalion, 142nd Aviation Regiment. The new unit began receiving its first UH-60 Blackhawks the same year.

Numerous missions and deployments followed, including deployments to Honduras and Nicaragua between 1999 and 2006, a mobilization and deployment to Bosnia-Herzegovina 2002 and 2003, and border patrols along the US - Mexican border 2006.

In May 2007, following yet another reorganization in which the battalion was re-configured to its current make-up as an Assault Helicopter Battalion, the unit received its mobilization alert order prepping it to participate in Operation Iraqi Freedom.

The battalion was deployed in Iraq from August 2008 to the May of 2009. The battalion deployed to Baghdad and a few other locations in southern Iraq providing aviation support throughout the region, supporting the 10th Mountain Division.

The battalion deployed to New Orleans following Hurricane Katrina in 2005, and has provided support during state emergency response missions following the attacks of Sept. 11, 2001, Hurricanes Irene and Lee in 2011, Superstorm Sandy in 2012, and a deployment to Puerto Rico in 2017 to assist in the aftermath of Hurricane Maria.

The battalion has a UH-60 company based at Republic Airport in Ronkonkoma and Albany International Airport in Latham.