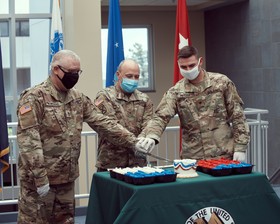 LATHAM, NY (06/11/2021) (readMedia)-- The New York Army National Guard will celebrate the 246th birthday of the United States Army on Monday afternoon, June 14 at the New York State Division of Military and Naval Affairs Headquarters with a traditional cake-cutting ceremony.

One of the oldest Soldiers present will join a young Soldier in cutting the Army Birthday cake.

The Army National Guard is one of three components of the Army of the United States along with the Active Army and the Army Reserve.

WHAT: A traditional cake-cutting ceremony commemorating June 14, 1775 which the United States Army considers its birthday. Traditionally the oldest Soldier present joins the youngest Soldier in cutting the Army Birthday cake. The older Soldier represents the history and traditions of the Army while the young Soldier represents its future. The Capital Region Chapter of the Association of the United States Army is providing the cake. The two cut the cake with a ceremonial saber.

For access to this secure military facility, please contact the Division of Military and Naval Affairs public affairs office at 786-4581.

PFC Tomlin enlisted in the New York Army National Guard in March 2021. He trained as a human resources specialist at Fort Jackson, South Carolina, and serves in the personnel section of the 42nd Combat Aviation Brigade, which has aviation elements across New York and is headquartered in Latham.

Chief Warrant officer 4 Brian Sherman has been in uniform since 1978.

In 2007, after moving back to New York, he joined the New York Army National Guard and in 2009 he became an member of the Active Guard and Reserve. He deployed to Afghanistan in 2012 for a second time.

In 2017, Sherman graduated from SUNY Empire State College with a bachelor's degree in business management and economics at age 56, earning a 3.96 GPA.

When the American Revolution broke out in 1775, the American colonies did not have a single Army. Each colony had its own militia but there was no overall commander.

By June of 1775 an "army" composed of New England militia troops had a British force trapped inside Boston. But the force was poorly organized.

Recognizing the need to enlist the support of all of the American colonies, the Massachusetts Provincial Congress asked the Second Continental Congress in Philadelphia to assume authority for the New England army. Reportedly, at John Adams' request, Congress voted to "adopt" the Boston troops on June 14, although there is no written record of this decision.