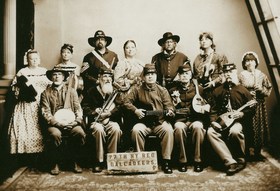 The 77th New York Regimental Balladeers, based in Windham, N.Y. will perform in Saratoga on July 6.

The musical tribute presented by the 77th New York Regimental Balladeers chronicles America's wartime story through song. These Revolutionary War, Civil War, World Wars I and II, Korea and the Vietnam era wartime ballads, songs and tunes are intended to evoke those powerful images and memories that define our unique and shared American wartime experience.

This special concert, free to the public, honors the "Citizen Soldier" and provides listeners with a musical history timeline spans the fiddle and banjo in camp, the parlor piano, pre-radio concert hall productions and radio broadcasts.

The songs and melodies that cover 1776-1976 reflect the aesthetic, and political currents of the contemporary times in which they were composed and heard.

The 77th New York Regimental Balladeers, based in Windham, N.Y. are celebrating their twentieth year and over 460 concert performances. The band is dedicated to preserving the songs, tunes, history and spirit of the Antebellum and Civil War period using the original musical arrangements and lyrics to convey how our ancestors talked, their rhythms, accents, beliefs, their spirituality, motives and patriotism.

The Balladeers have been recognized by the United States Department of the Interior, Gettysburg National Military Park for their outstanding and authentic portrayal of the music of the period.

The original 77th New York Regimental band was comprised of military personnel from Fulton, Essex and Saratoga Counties who fought in the Civil War. The group banded together in 1872 as part of the Survivors Association of the Seventy-Seventh Regiment, New York State Infantry Volunteers of 1861-65. These musicians kept alive the memories they had experienced together during the war and the band flourished into the early 1900s.

The New York State Military Museum and Veterans Research Center is housed in the historic New York State Armory in Saratoga Springs. The mission of the museum and research center is to preserve, interpret and disseminate the story, history and records of New York State's military forces and veterans. The collection is divided into the museum and the library/archives holdings.