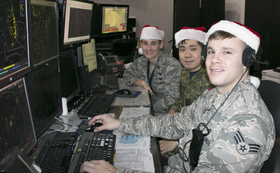 Airmen at the Eastern Air Defense Sector train for the annual NORAD Tracks Santa effort on Christmas Eve. (See more complete photo caption at the end of the press release)

"NORAD has supported Santa Claus' Christmas Eve operations for 64 years and we are always delighted to help," said Col. Emil J. Filkorn, EADS Commander. "I can assure everyone that EADS will do everything in its power to assist Santa with his critical mission."

The defense of Canada and the United States is NORAD's top priority. A binational U.S. and Canadian command charged with aerospace and maritime warning and aerospace control of North America, NORAD also monitors aerospace activity globally. Every year during the holidays, NORAD assumes the supplementary mission of tracking Santa as he travels around the world.

EADS mission is to counter all air threats to the eastern half of the continental U.S. through vigilant detection, rapid warning and precise tactical control of NORAD forces. The same radars, satellites and interceptors used to assist Santa on December 24 are employed year-round to defend Canada and the United States.

On Dec. 24, parents and children can call 1-877-HiNORAD (446-6723) for Santa's up-to-date location. Santa's location can also be tracked at the NORAD Tracks Santa website, www.noradsanta.org, or on Facebook and Twitter at @NORADSanta.