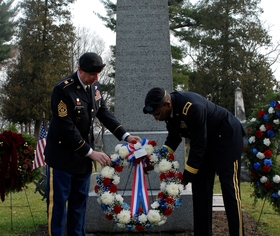 The United States Military honors our former presidents by laying wreaths at their gravesites on the anniversary of their birth. The New York Army and Air National Guard traditionally conduct the wreath layings at the graves of President Chester A. Arthur in Menands, and President Martin Van Buren in Kinderhook.

Images of the wreath laying ceremony, military colorguard, and troops in formation. There will be opportunities to interview ceremony participants.

Van Buren was the first president born under the U.S. flag. A historical marker on Kinderhook's Hudson Street indicates the site of the Van Buren family tavern, where the president-to-be was born in 1782. He's buried in the family plot at the Kinderhook Reformed Cemetery.

Van Buren served in the White House from 1837 to 1841. He ran for re-election in 1840 but was defeated by William Henry Harrison. He sought the Democratic nomination for president in 1844, but lost to James K. Polk. In 1848 he was the unsuccessful presidential candidate of the Free-Soil Party, a group opposing an extension of slavery. That defeat marked the end of his political career.

Brigadier General Robert W. Lovell serves as a special assistant to the commander of the New York Air National Guard. His prior assignment was on active duty with the United States Africa Command as the Deputy Director for the Intelligence and Knowledge Development Directorate. There. Lovell discharges all Intelligence and Counterintelligence responsibilities as assigned by the Unified Command Plan.

General Lovell was commissioned in 1985 through the Air National Guard Academy of Military Science, Knoxville, Tennessee. His career includes various assignments at the interagency, combined, joint, combatant command, and headquarters level. General Lovell has served a number of activated tours including Department of Defense Liaison to the National Science Foundation in Washington District of Columbia.