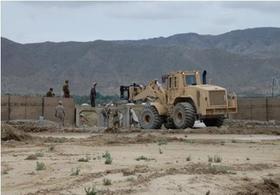 HORSEHEADS, NY (02/15/2011)(readMedia)-- Soldiers of the New York Army National Guard's 827th Engineer Company will reunite with family members during a redeployment ceremony at the Sikorsky Aircraft Military Completions Center after completing demobilization at Fort McCoy, Wisconsin. The unit served in Afghanistan since April 2010 in support of Operation Enduring Freedom.

WHO: 160 Soldiers and family members of the 827th Engineer Company and Brig. Gen. Patrick Murphy, the Adjutant General of New York and Commander of the New York National Guard.

WHAT: Redeployment Ceremony for 180 New York Army National Guard Soldiers served 10 months in Afghanistan. The unit will hold a formal reunion with family members before their release home.

Imagery of the Soldiers in formation, reuniting with families. There will be opportunities to interview Soldiers, their families and New York Army National Guard leaders.

News media expecting to cover the family reunion should notify Capt. Tom Rome of the 204th Engineer Battalion at (518) 866-4207 prior to their arrival at teh Sikorsky Aircraft Military Completions Center.

The 827th Engineer Company is a horizontal construction company, which means they specialize in building and repairing roads headquartered in Horseheads, N.Y., and is part of the 204th Engineer Battalion based in Binghamton, N.Y.

During their deployment to Afghanistan, the 827th conducted road construction and repair with D7-Dozers, Scrapers, Graders, and general earthmoving equipment. They are regularly called to assist the State with snow removal and flood support such as their recent State Mission with flooding of Delaware and Sullivan counties June 18, 2007.

The 827th Engineers served with Task Force Red Dragon and the 1092nd Engineer Battalion. The task force, based at Forward Operating Base Sharana in eastern Afghanistan, provided engineer support at 25 different locations throughout the country. The unit was part of Regional Command East, covering 13 provinces in Eastern Afghanistan.

Nearly half of the unit received recognition for combat service, including 70 recipients of the Combat Action Badge, two Purple Hearts and seven awardees of the Bronze Star Medal.

The Company received additional Soldiers for their deployment from the 204th Engineer Battalion located in Binghamton and the 152nd Engineer Company located in Buffalo.

The 827th also has a detachment in Walton, NY.

Capt. Jeffrey Miles is the company commander and 1st Sgt.Armando Lopez is the first sergeant.