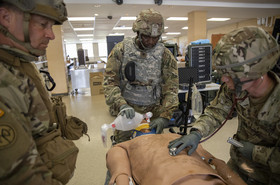 Soldiers of the NY National Guard's 466th Area Support Medical Company training at Camp Smith Training site in June. The Soldiers will be mobilized and leaving for Fort Hood, Texas this weekend.

The Soldiers will leave for Fort Hood, Texas where they will conduct additional training before they deploy to the U.S. Central Command area of responsibility.

The company's mission, according to Major Jason Cossey, its commander, will be to provide emergency care and primary care to Soldiers deployed in the region. The Soldiers are expected to be away from home for 11 months.

The 466th deployed to Iraq in from 2006 to 2007 and operated an army field hospital and three troop medical facilities in south and central Iraq and received a Meritorious Unit Citation for its service.

While the company is based at the New York State Armory on Stone Quarry Road in Queensbury, the Soldiers come from across the state.

Several of the Soldiers deploying to Iraq have already been on duty during the New York National Guard's COVID-19 response mission, assisting in running COVID-19 testing stations.

The company conducted pre-mobilization training in June at Camp Smith Training Site near Peekskill. The training was modified to deal with the constraints of operating in a COVID-19 environment.

For example, the Soldiers were divided into groups of ten people who did not interact with others.

These teams moved, trained, ate and lived together to minimize exposure to the COVID-19 virus and comply with social distancing recommendations by the Centers for Disease Control and Prevention.

All Soldiers were screened for COVID-19 with daily temperature readings and twice-a-day checks for symptoms, Cossey said. Soldiers were also required to wear masks.

The Soldiers will likely be quarantined when they arrive at Fort Hood before they can begin training. They will be tested for COVID-19 prior to their departure for the Middle East.

The unit will train at Fort Hood for about a month before deploying.

The company will hold a deployment ceremony for the deploying Soldiers and New York National Guard leaders at the armory on Saturday, August 1. Families will not be part of this event and social distancing will be practiced.

The Soldiers will depart from the Armory on Sunday, August 2 .

Media interested in covering these events should contact the Division of Military and Naval Affairs Public Affairs Office at 518-786-4581.