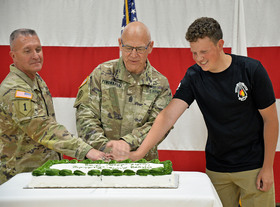 The annual celebration of the Army was delayed a day, because on June 14, Major General Ray Shields, the adjutant general of New York, and other senior Army Guard leaders, were attending three deployment ceremonies for 1,100 Soldiers heading for the Horn of Africa.

"We look ahead this year to one of our largest windows of overseas missions, "said New York Army National Guard Command Sgt. Major David Piwowarski, who presided over the ceremony.

"Soldiers are ramping up for service in Kuwait, the Horn of Africa, and Europe. Our Soldiers understand the importance of the Army's 24/7 commitment to serve and defend," Piwowarski told the audience.

Around 2,800 New York Army Guard Soldiers are due to mobilize and deploy during 2022. On June 14, members of Task Force Wolfhound were celebrated during events in Utica, New York City and on Long Island.

As is tradition, a veteran Soldier and young Soldier cut the Army birthday cake with Piwowarski.

While Fisher may be the oldest Soldier present, he still scored 500 on his most recent Army Combat Fitness Test, Piwowarski noted.

Lugo, a resident of Clifton Park who will graduate from Shenendehowa High School in a week, has enlisted to be a wheeled vehicle mechanic in G Company of the 427th Brigade Support Battalion. He is slated to attend Basic Training at Fort Jackson, South Carolina in August.

Lugo, said he was surprised to be asked to represent the future of the Army, but added that he was excited to be part of the event. He's looking forward to reporting in for basic training, Lugo added.

Fisher said it was "bittersweet" to be one of the oldest Soldiers in the New York Army Guard.

He enjoyed getting a chance to talk to Lugo and see how excited he was about being part of the Army and the National Guard, Fisher said.

"It is neat to see this once again through his eyes," Fisher added.

On June 14, 1775 the Continental Congress resolved to "that six companies of expert riflemen, be immediately raised in Pennsylvania, two in Maryland, and two in Virginia... [and] as soon as completed, shall march and join the army near Boston, to be there employed as light infantry, under the command of the chief Officer in that army."

That legislation is considered to mark the creation of the United States Army.

While the U.S. Army is turning 247, Piwowarski noted that citizen -Soldier colonial militias had been around for 139 years before that date.

When the Continental Army was created, it was the militias of the New England colonies that were the core of that new national Army, Piwowarski said in his remarks.

"While our Army is 24/7 ready to face threats overseas from adversaries and enemies, we also recognize that for our citizen Soldiers, putting boots on the ground on the home front is part of our lane of expertise too," Piwowarski said.