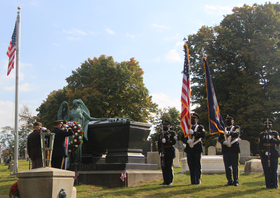 MENANDS, NY (10/04/2021) (readMedia)-- New York Air National Guard Major General Timothy LaBarge will honor Chester A. Arthur, the 21st President of the United States who graduated from Union College, with a formal wreath laying on his grave at Albany Rural Cemetery on Tuesday, October 5, the 192nd anniversary of his birth.

Visual opportunities will include the formal wreath-laying ceremony, and the presentation of the colors by a New York Air National Guard Color Guard. An Honor Cordon of troops will be present. A bugler will play taps. Natali will deliver a few brief remarks and there will be an opportunity to interview him.